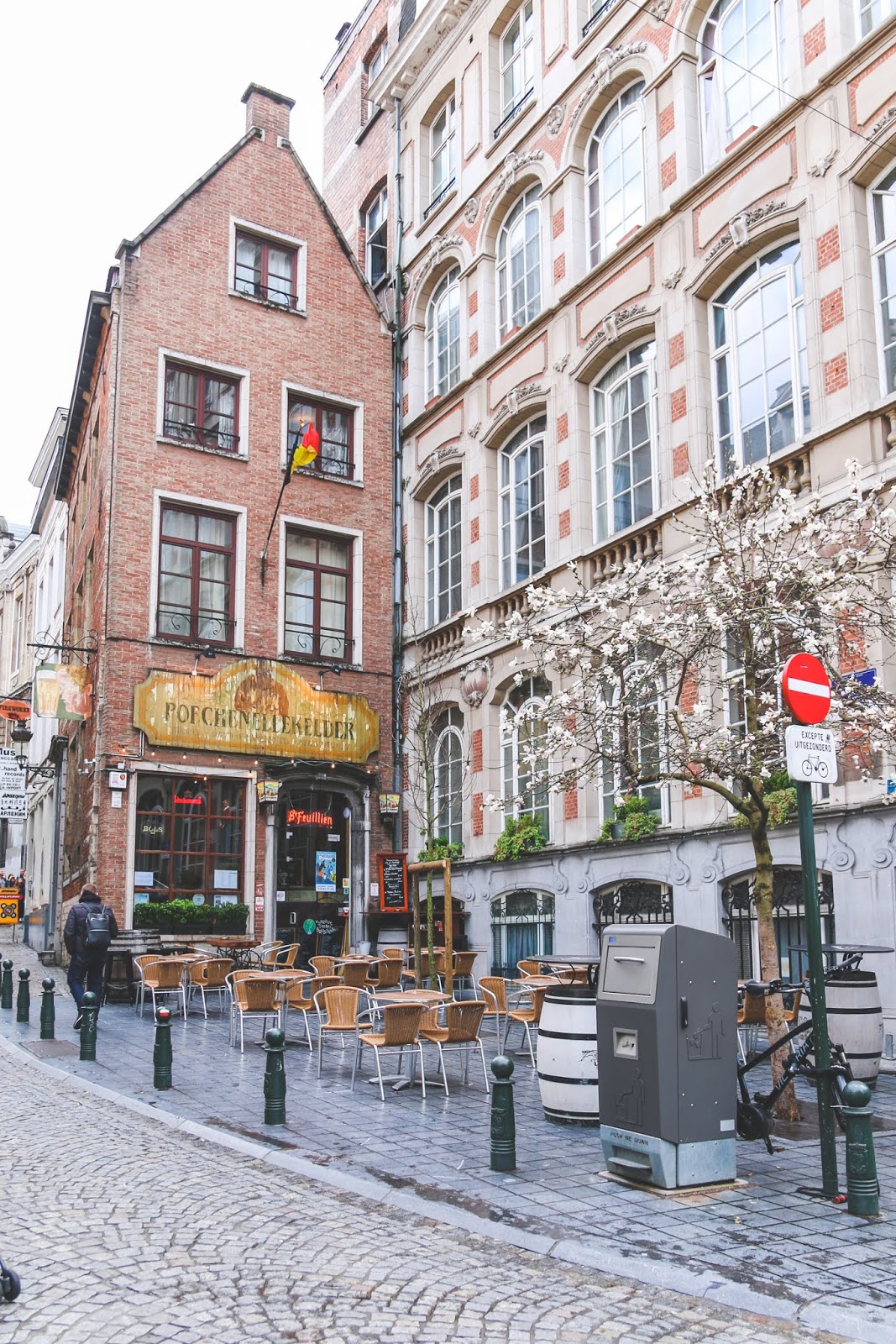 In between Amsterdam and Paris, lies Brussels, Belgium, home to the impressive Grand Place and a bronze statue of a little boy urinated into a basin. It’s also home to nearly two million people and is considered the most densely populated area of Belgium. Unlike Amsterdam and Paris though, I felt like we only needed to spend one day in this Belgian capital and spent our second day taking a day trip to nearby Bruges.

We took the train in from Paris and arrived to a rainy, gloomy Brussels. I picked a hotel close to Brussel-Centraal since we were going to hop on another train to Bruges the next morning and then another one to Amsterdam the morning after that. We stayed at Novotel Brussels off Grand Place, it’s a two minute walk to the train station, a three minute walk to the Grand Place and sits in a cute little square surrounded by frites and chocolate!

First impressions, the Grand Place is simply amazing. Wow. I can see why it’s named one of Europe’s most beautiful squares and has been a UNESCO World Heritage Site since 1998. You can spend as little or as much time as you want in the square. I have to say, we went to the square every night and it’s just as impressive at night, so whenever you get a chance to go, go! If you’re heading to Brussels on an even year, like in 2020, try to go in August to see the Flower Carpet. It’s a biennial event where they cover the square with a million begonias. 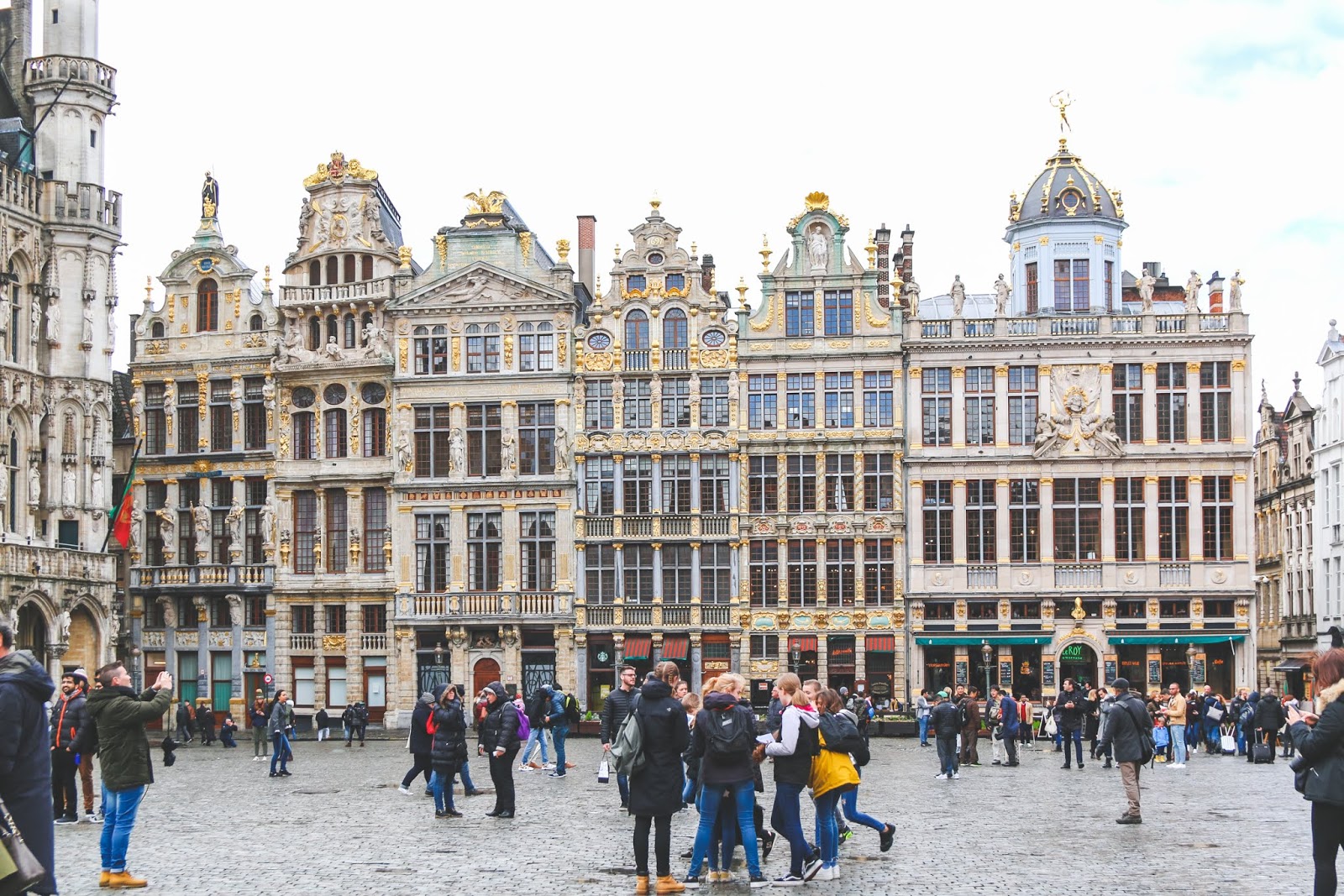 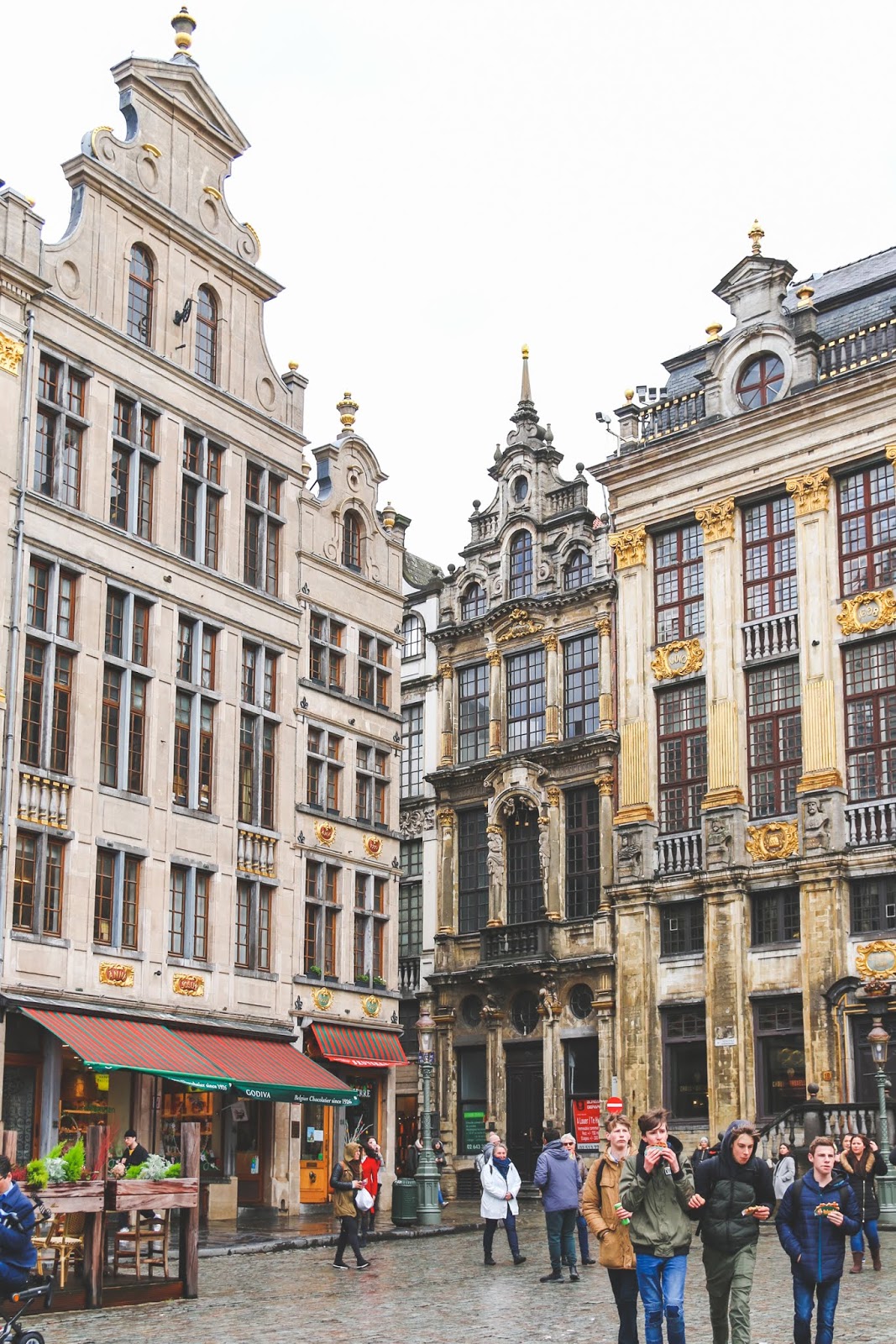 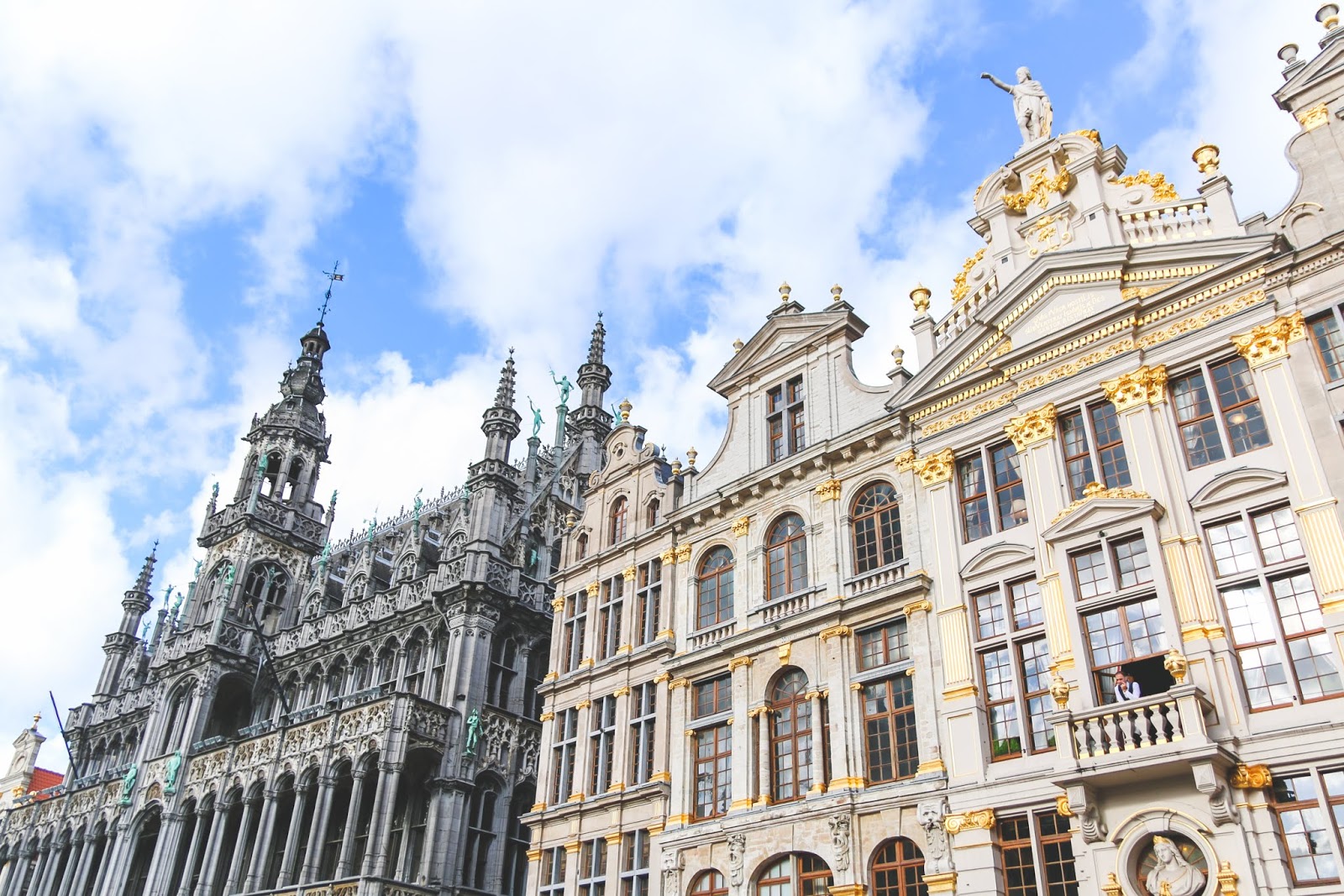 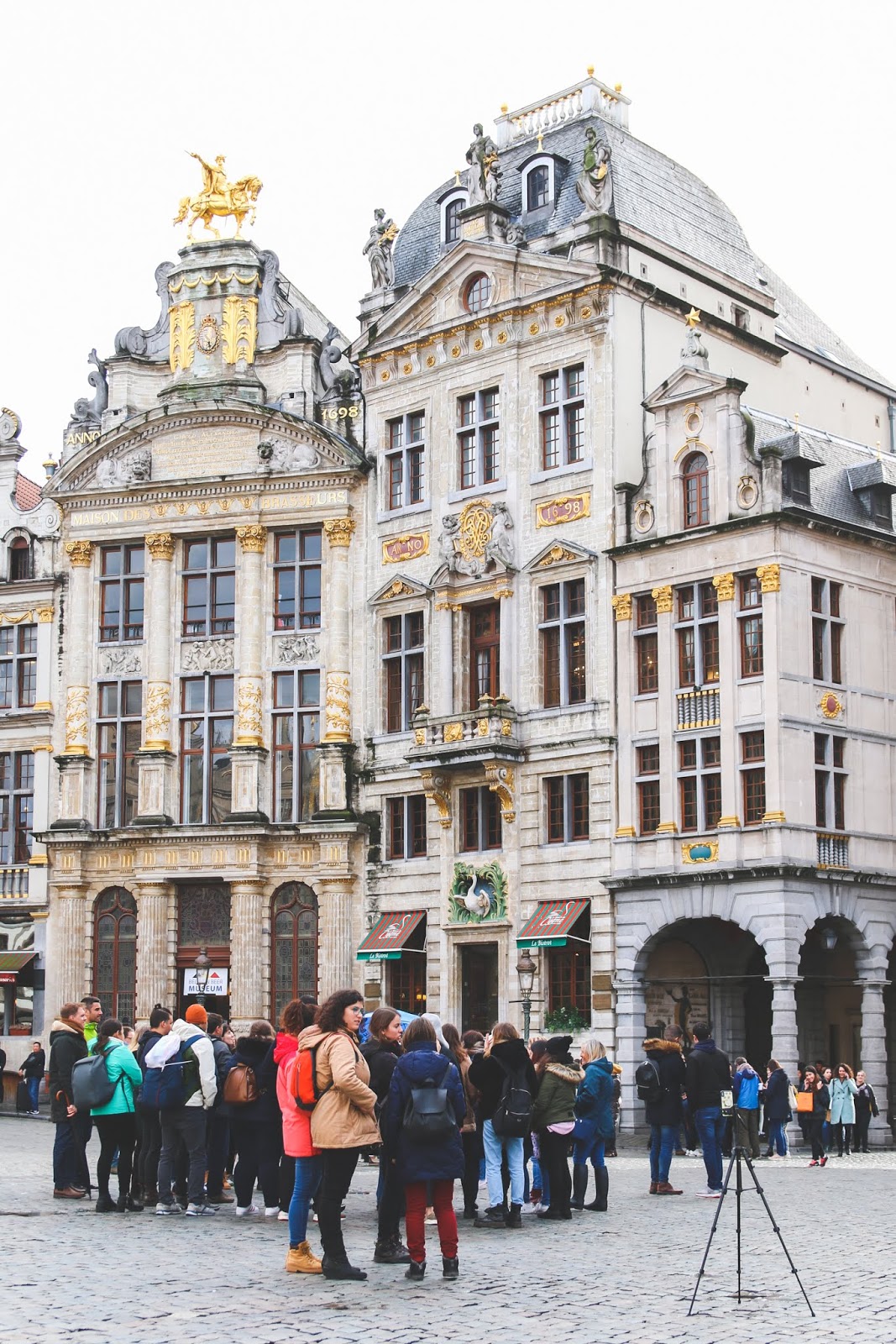 “Take my picture, I’m an Instagram model”- Aiden. That pretty much sums up the picture of Aiden below. Just southwest of the Grand Place, you can see another iconic landmark, Manneken Pis, Dutch for “Little Pissing Man”. It’s a small bronze sculpture of, you guessed it, a little boy urinated into a basin. The statue and fountain have been there since 1618 but in 1965, the original statue was moved to a museum and was replaced by a replica. Head over to the Brussels City Museum if you want to see the real deal. If you’re lucky, you can catch the “Little Pissing Man” dressed up for the holidays or for a local sporting event.

If you’re looking for a quick lunch spot, head over to Bia Mara for some great fish and chips. Fish and chips in Brussels? Trust me, it was really good! The restaurant is small so be prepare for a wait during peak hours.

Everywhere you go, you will find chocolate, waffles, and frites. All three things, you have to try at least once while in Belgium. I don’t really like chocolate (I know, I know) but we did bring some home as gifts. I do love waffles and totally ate my fair share of them while in Brussels. I love fries, but do I dare say, I enjoy American fries more than frites? I’m not a huge fan of thick fries and frites are exactly that, really thick fries. The sauce they put on the frites was good though. 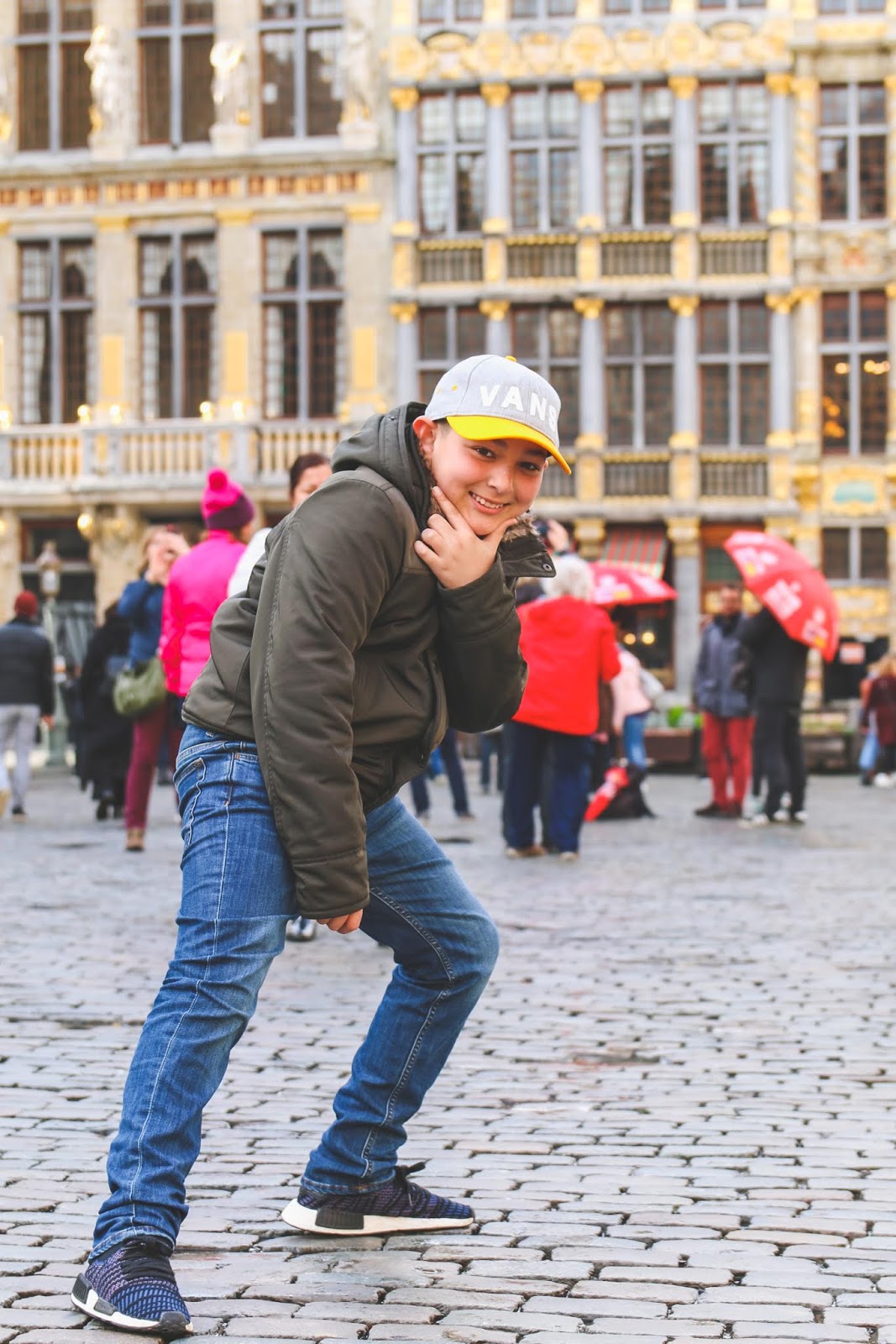 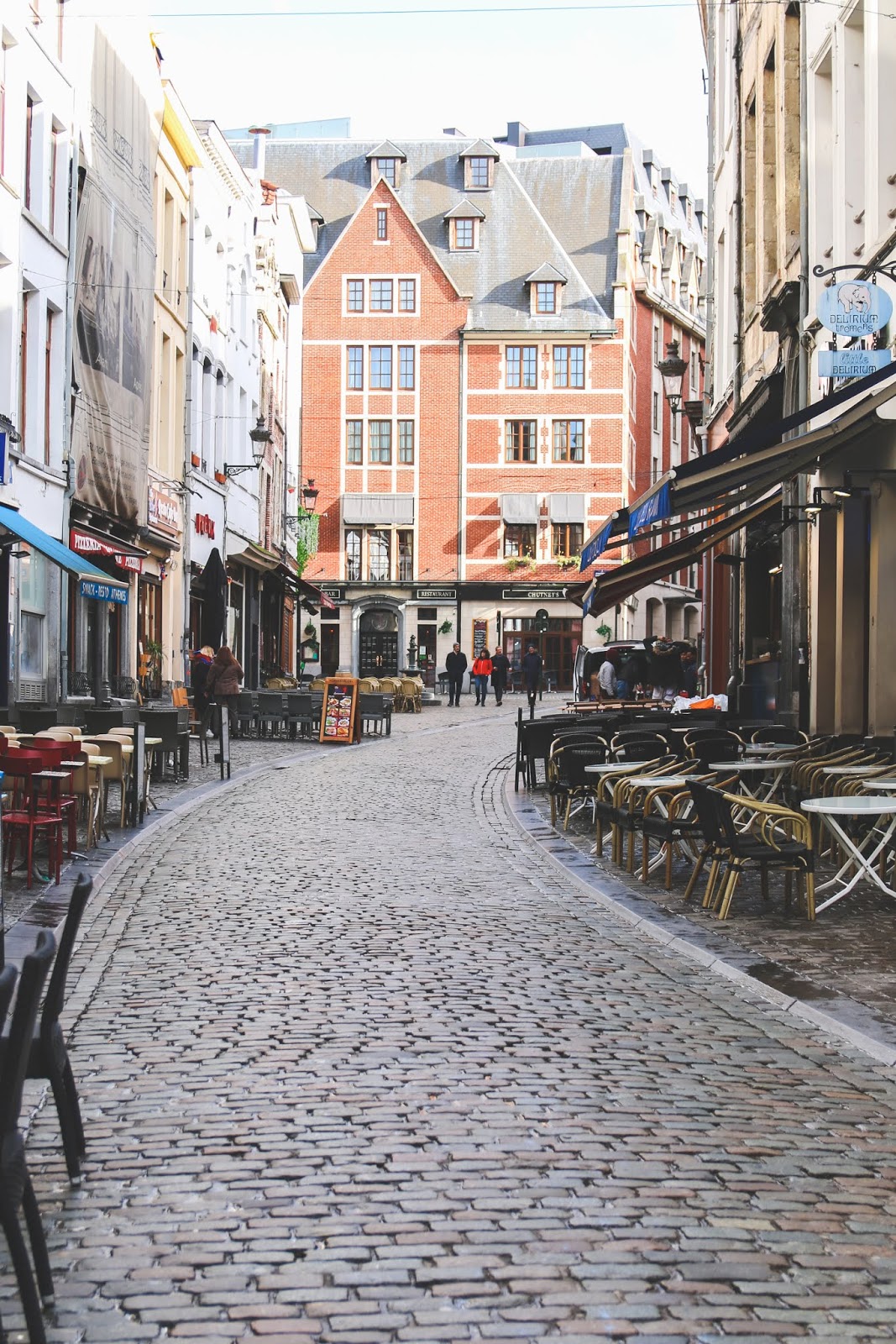 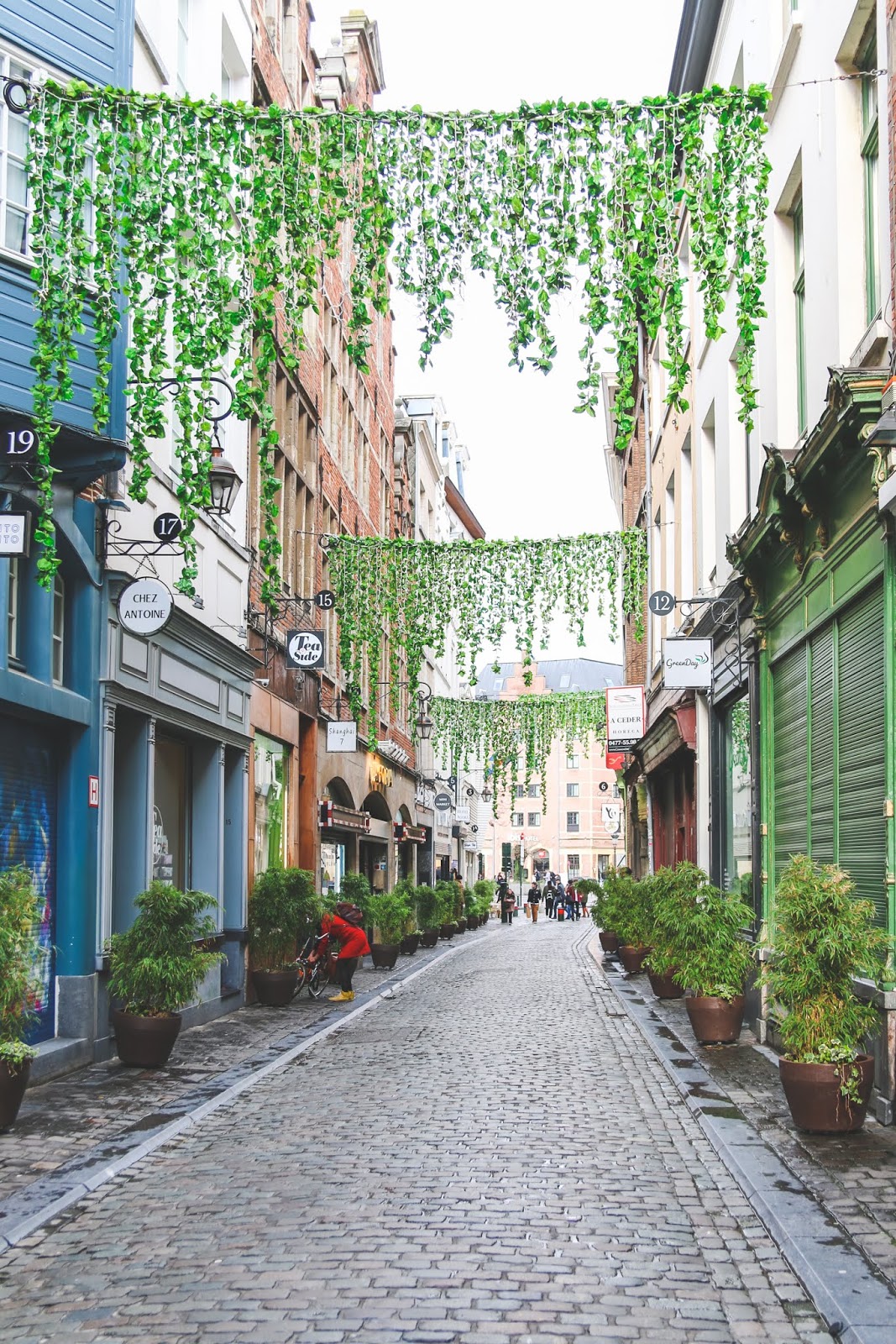 We didn’t venture out too far from city center, but we did see lots of colorful street art including a mural of The Adventures of Tintin. I remember reading those books when I was a kid, and totally didn’t realize that it was created by Belgian cartoonist Georges Remi.

We didn’t spend a lot of time in Brussels but that only gives us a reason to return one day. We did stop by the Royal Gallery of Saint Hubert to buy chocolate for our families back home. While we were there, they were filming something and had a large portion of the gallery blocked off. It looked like they were interviewing someone, not sure if they were famous or not. If you have more time in Brussels, here are some other things to do and see in and around the city: the Atomium, Mini-Europe, Royal Palace of Brussels, and Parc du Cinquantenaire to name a few! Have you been to Brussels, what are some things we must do on our next trip? 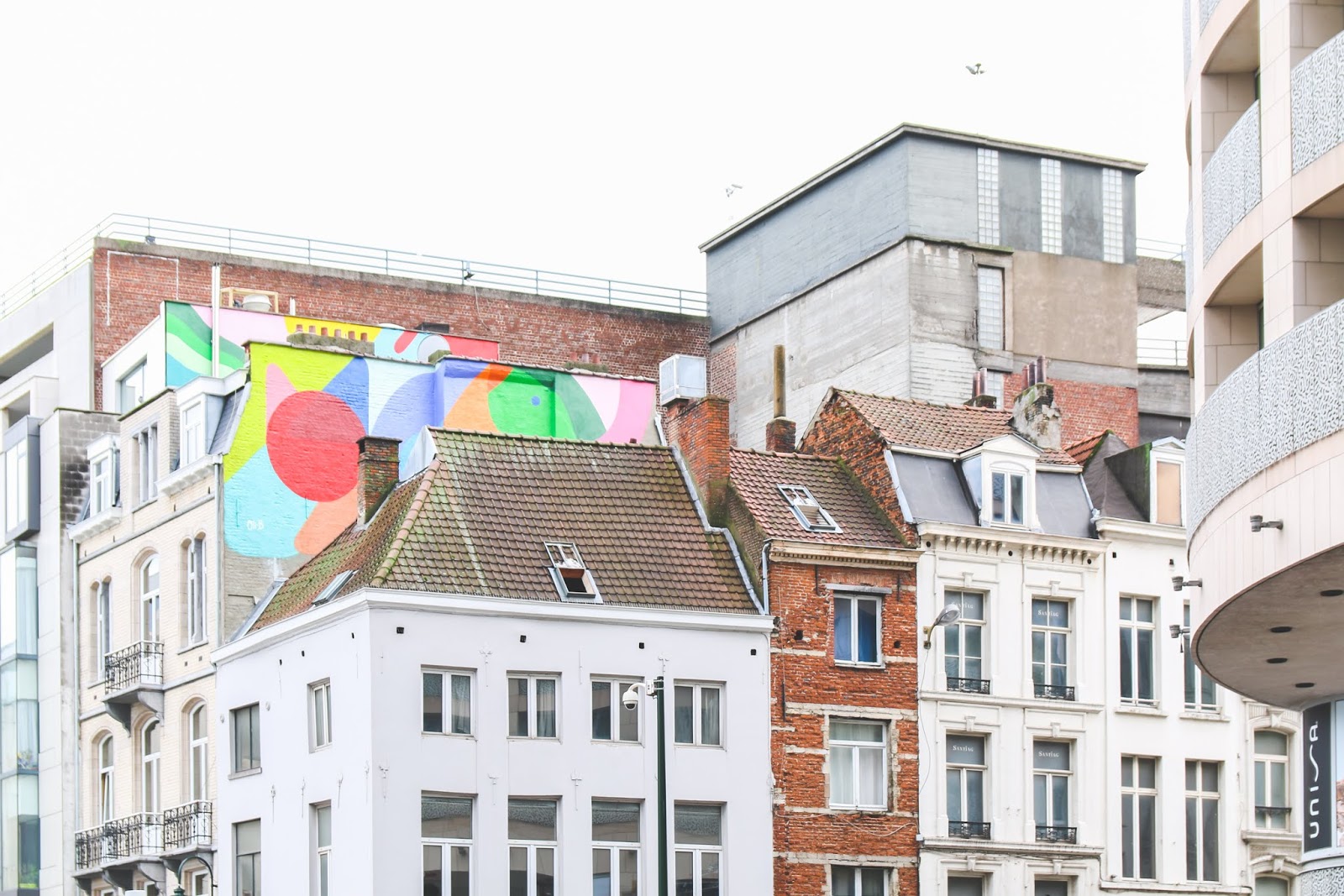 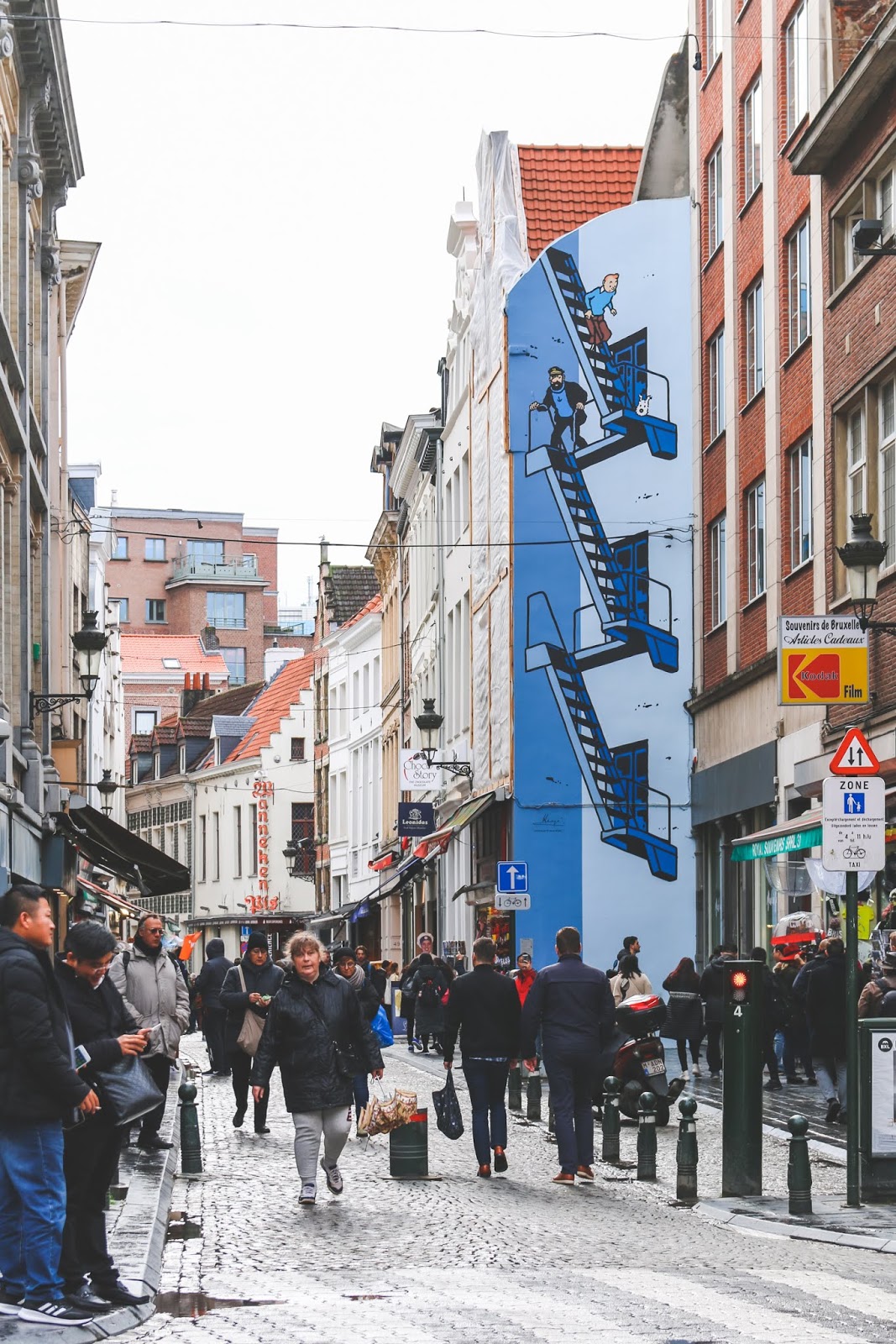 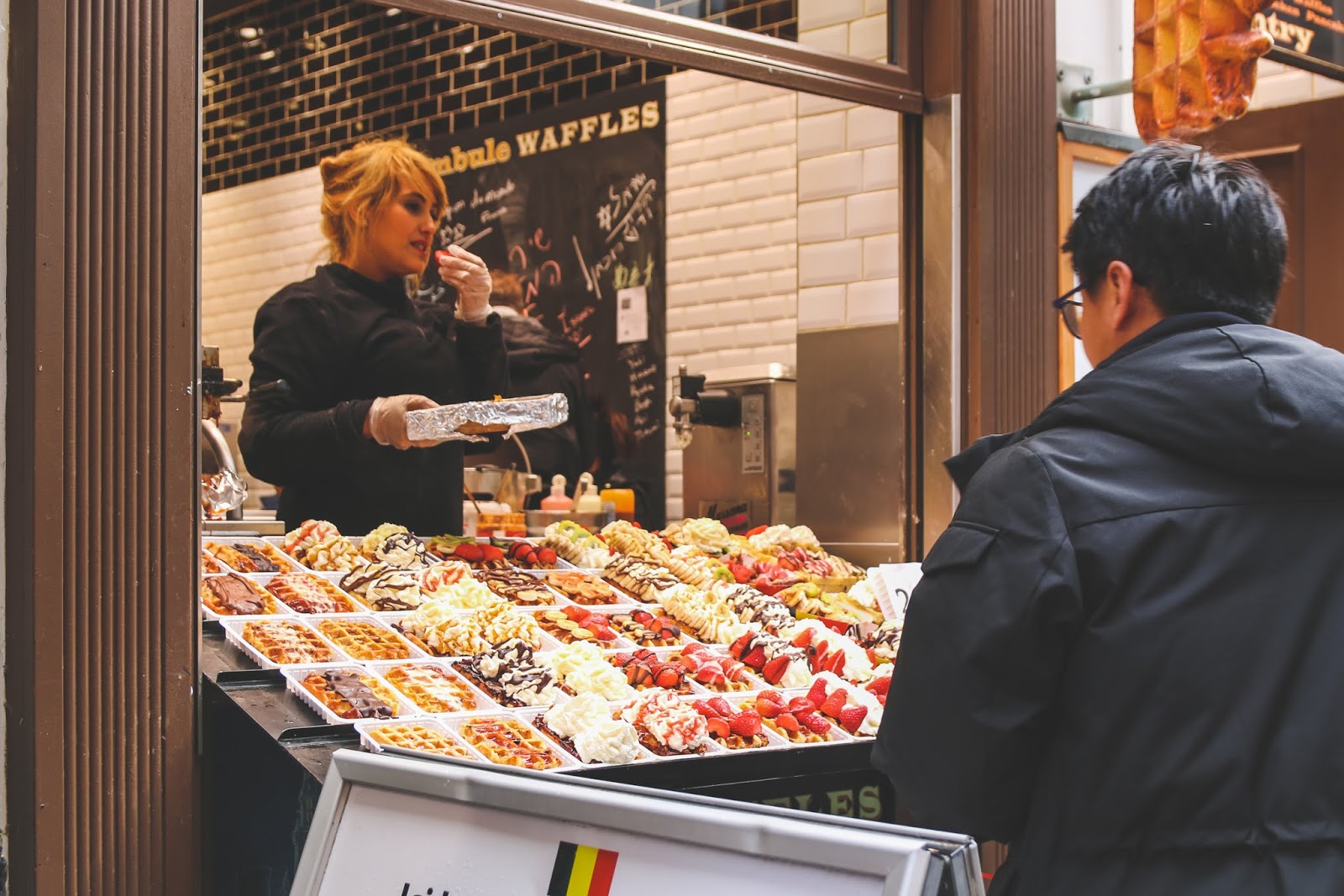 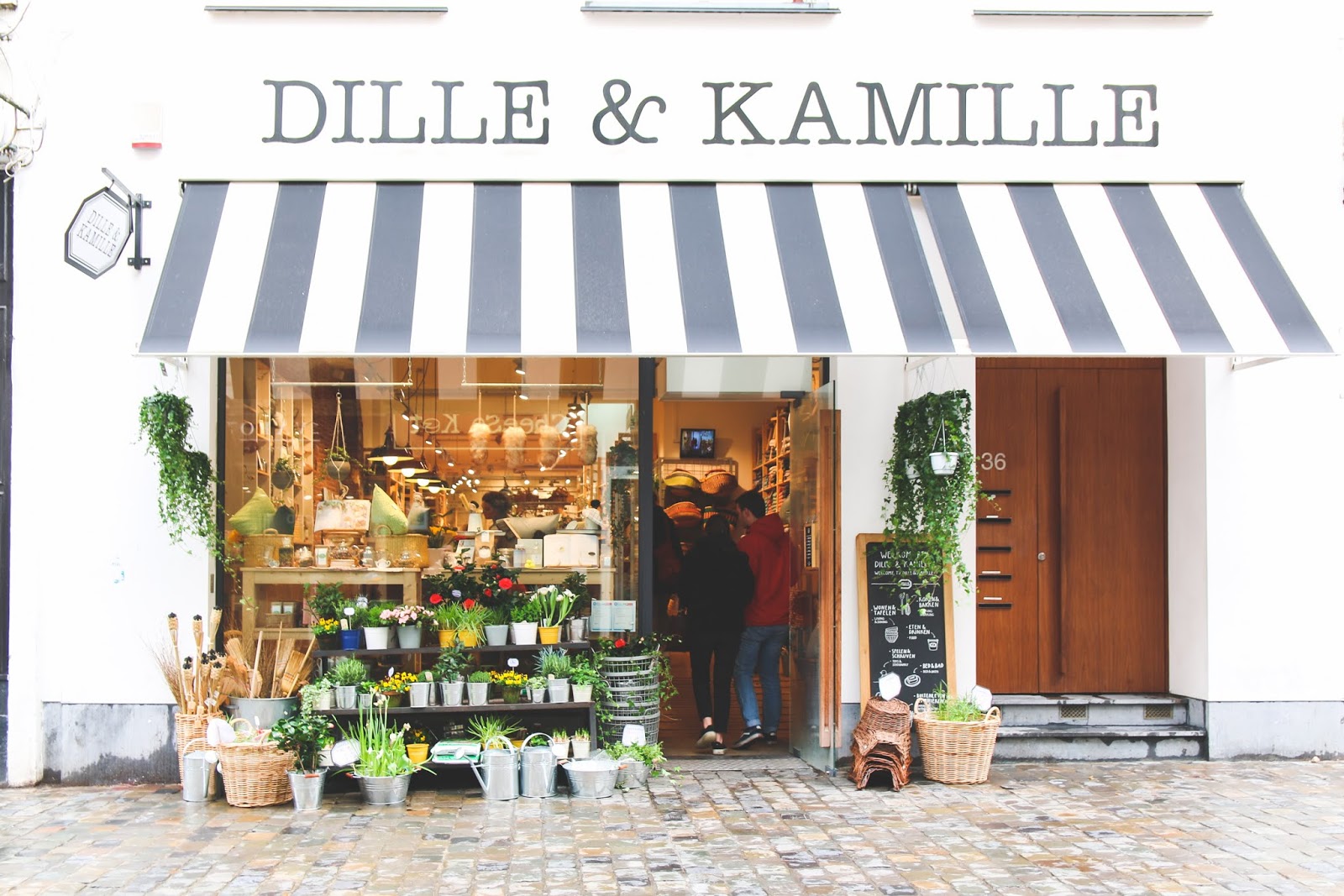 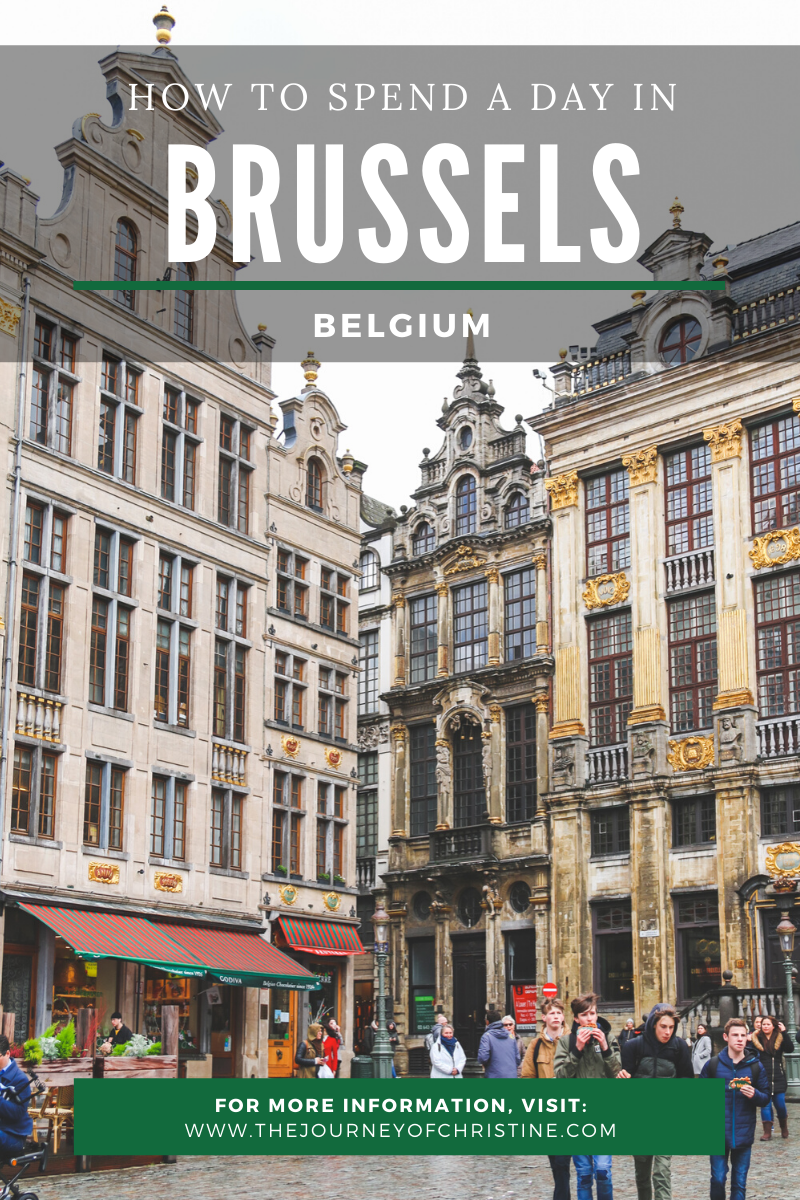