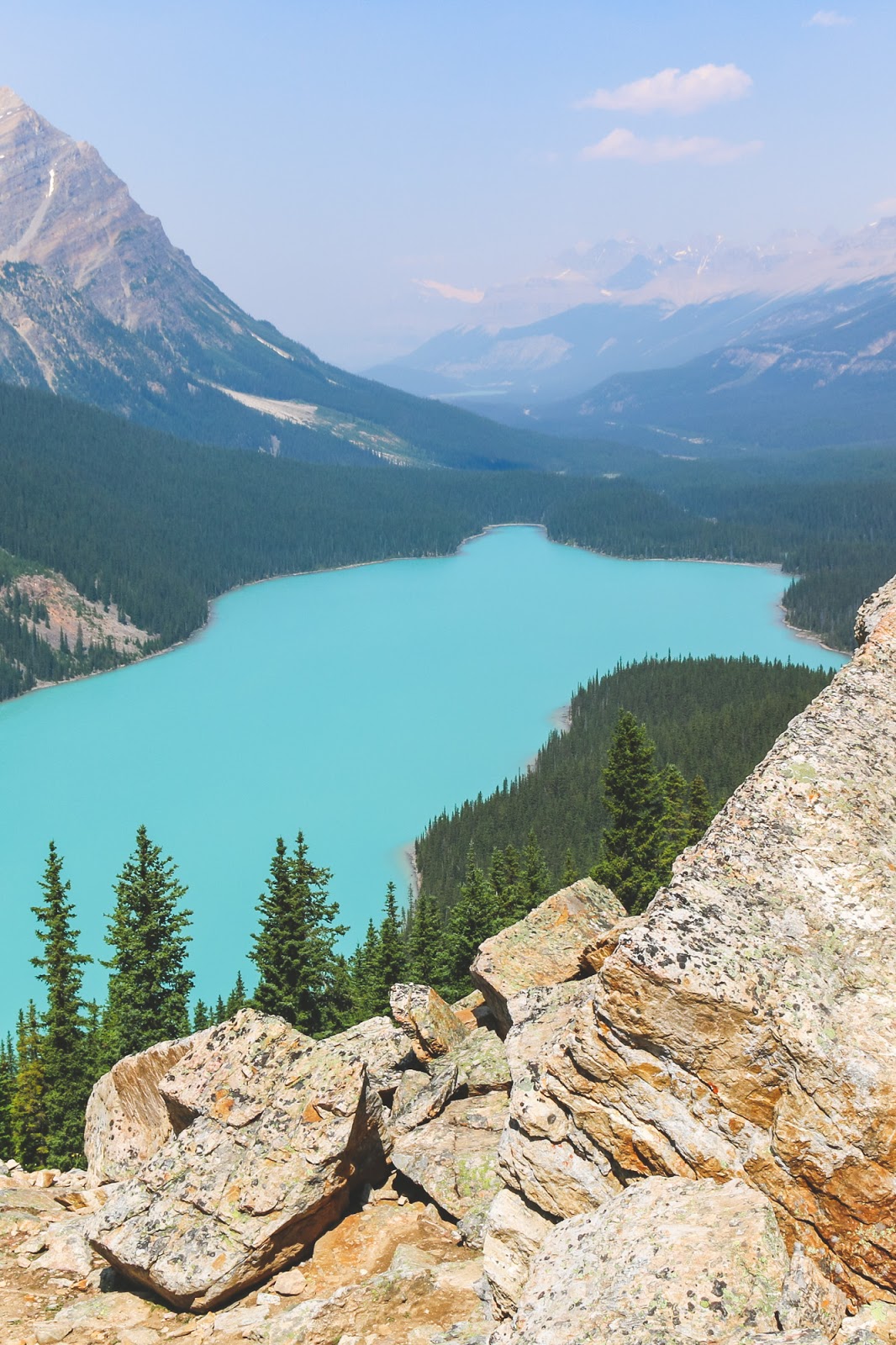 There’s no shortage of beautiful blue lakes in Banff National Park, but the bluest of them all would have to be Peyto Lake. After a morning chasing waterfalls and searching for hidden caves in Johnston Canyon, we drove an hour north of Banff (approximately 100 kilometers) to Peyto Lake. Glacial rock flour is to blame for Peyto Lake’s bright turquoise color and because of its unique shade of blue, Peyto Lake is a popular stop for tourists and photographers alike.
Because Peyto Lake is located in the northern part of Banff National Park (about 30 minutes north of Lake Louise), it is not as crowded as some of the southern lakes like Lake Louise and Moraine Lake but still expect a nice crowd. We arrived at Peyto Lake around 1:00 PM and we found roadside parking fairly easily. We weren’t sure how far we parked from the trail head but as it turns out, we were only about 5-6 cars back from the main parking lot. I was surprised that we found such easy and close parking. My thinking was that most of the early bird hikers were gone for the day and we would have the lake to ourselves but once we got to the wooden observation deck, I was proven wrong. Where did all these people park? I could see glimpses of the blue lake in between people’s heads, but taking a picture of it would have been impossible.

Before our trip I read that if you go past the observation deck, you can get a even better view of Peyto Lake minus the hoards of people so that is what we did. We didn’t even try to step foot on the deck and took off on the trail. 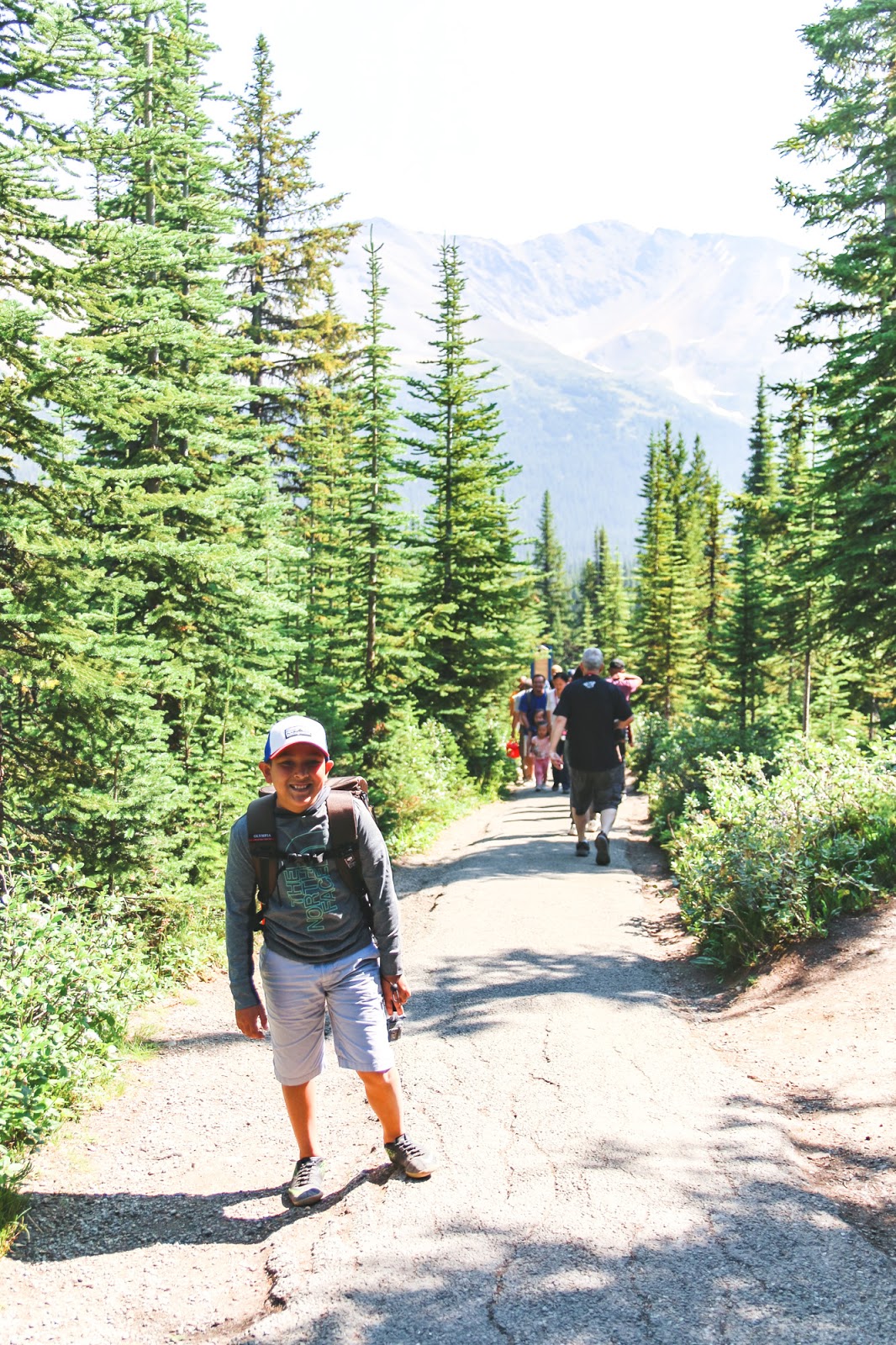 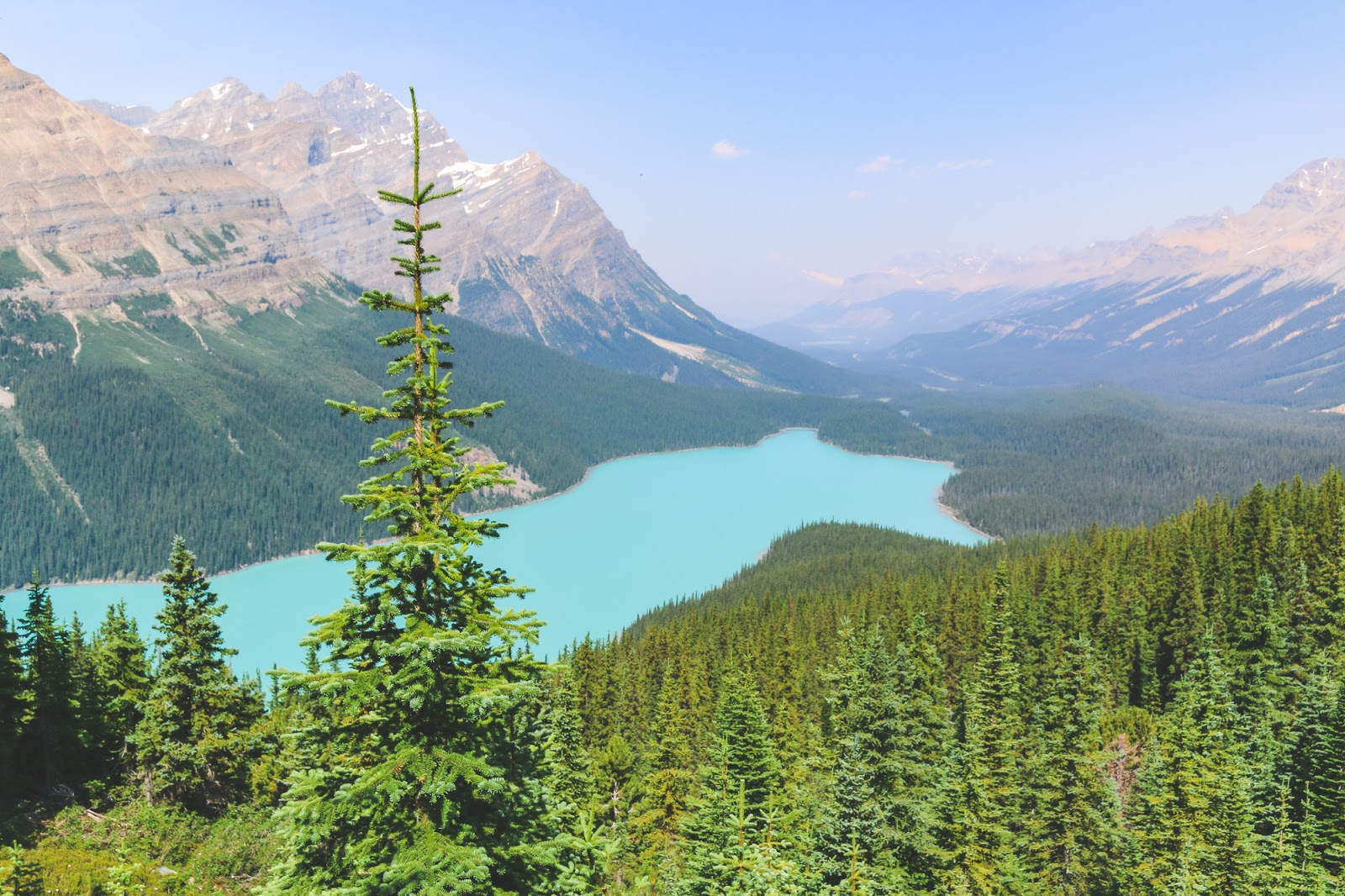 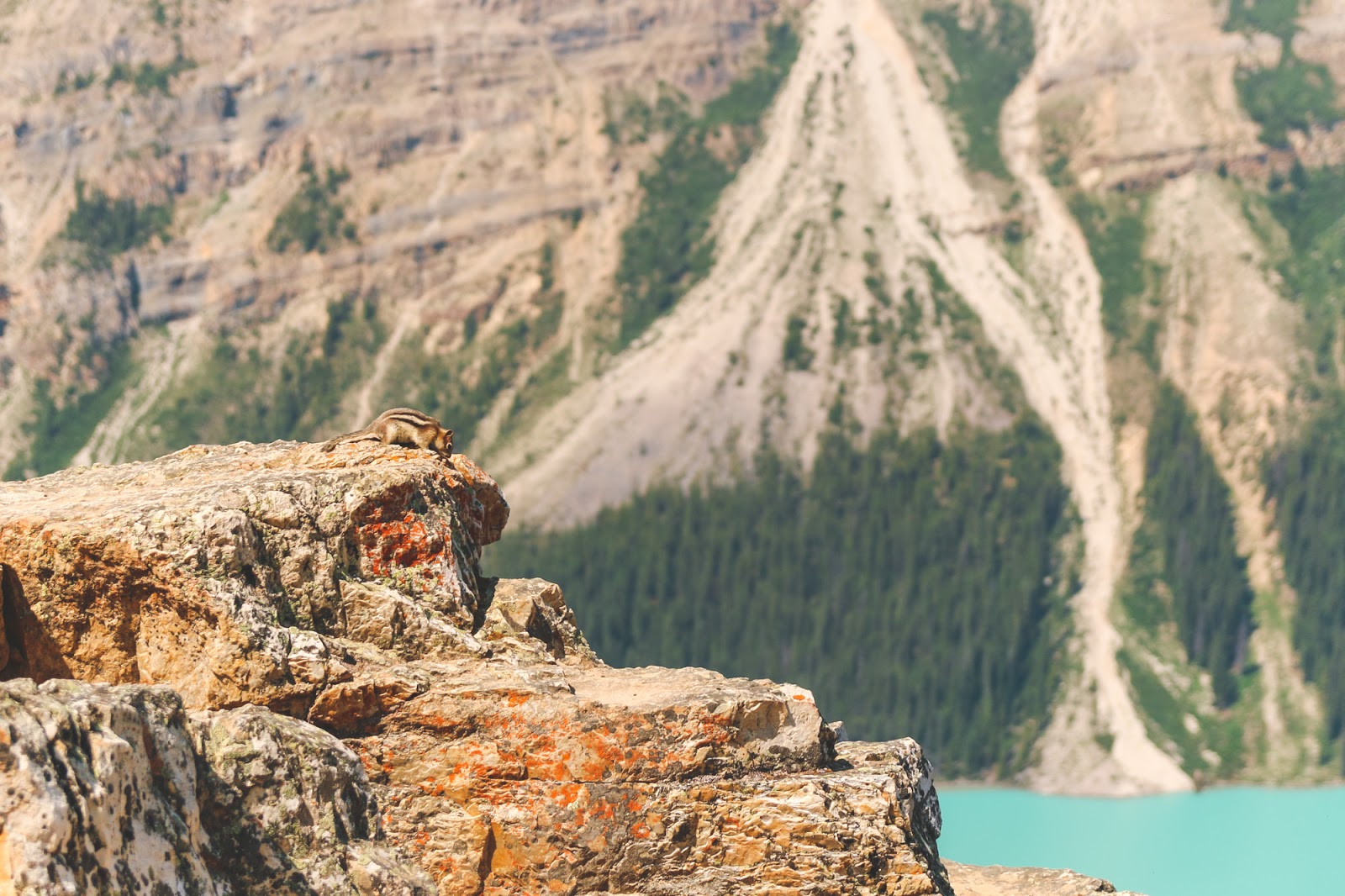 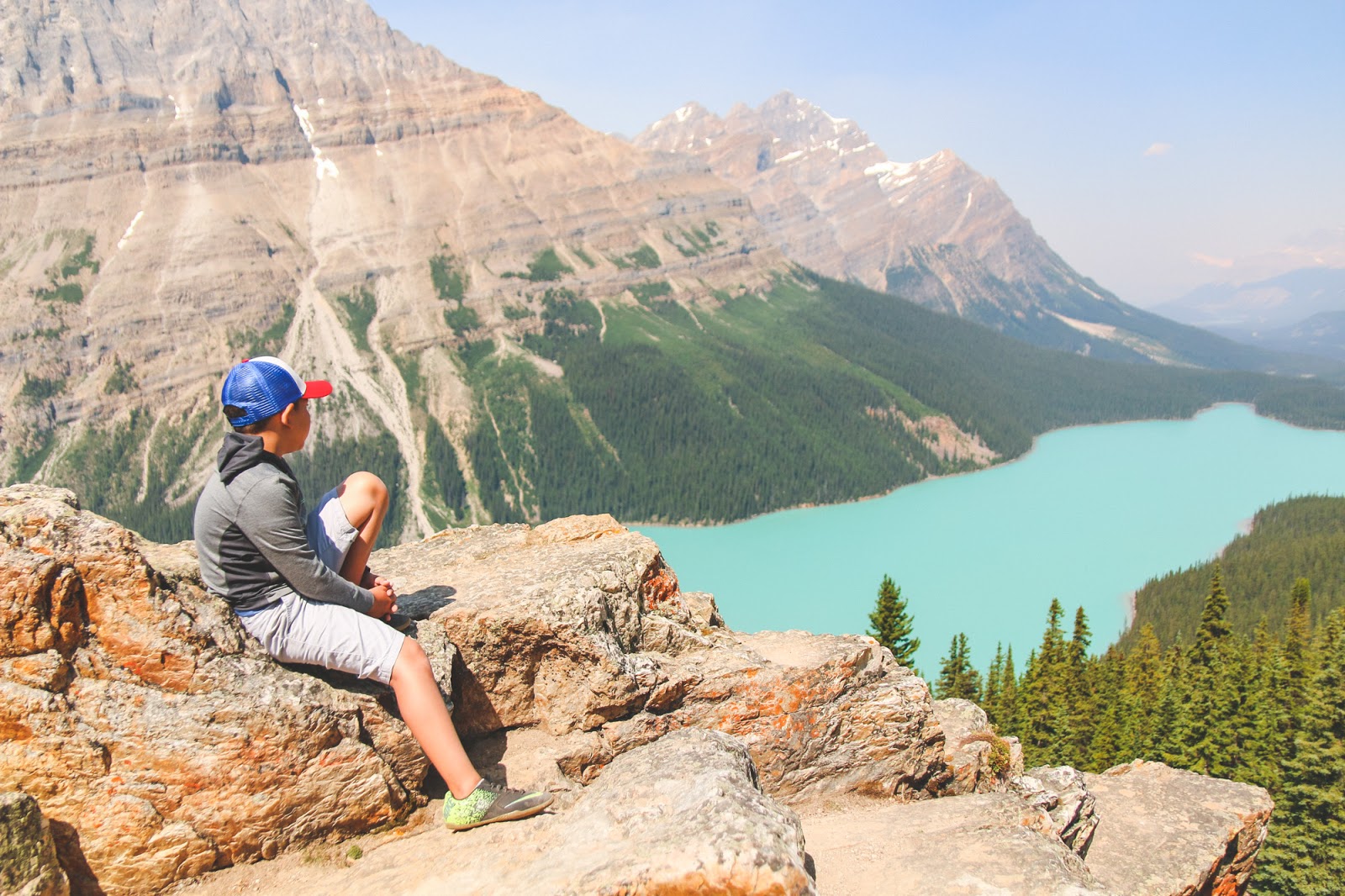 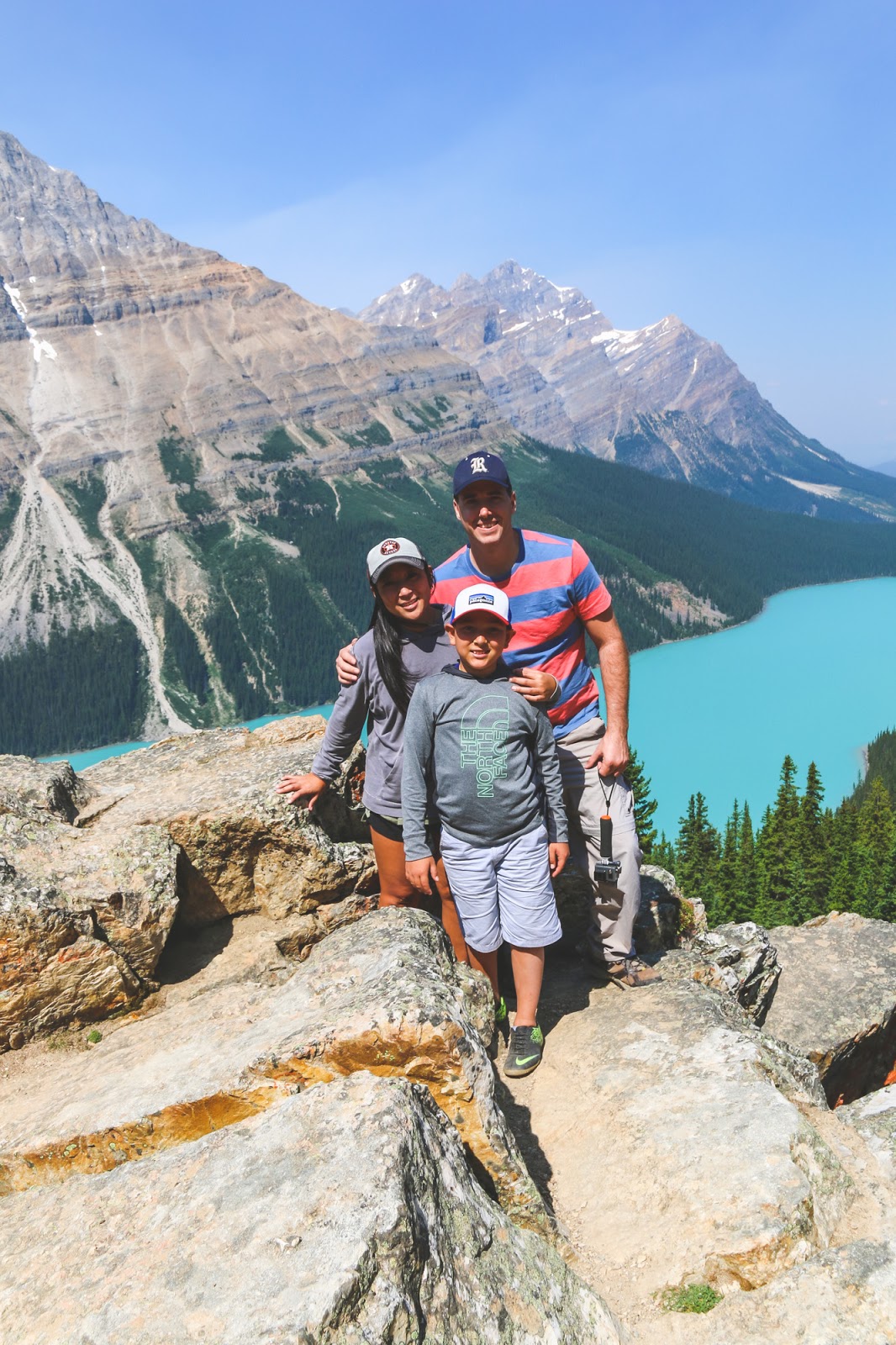 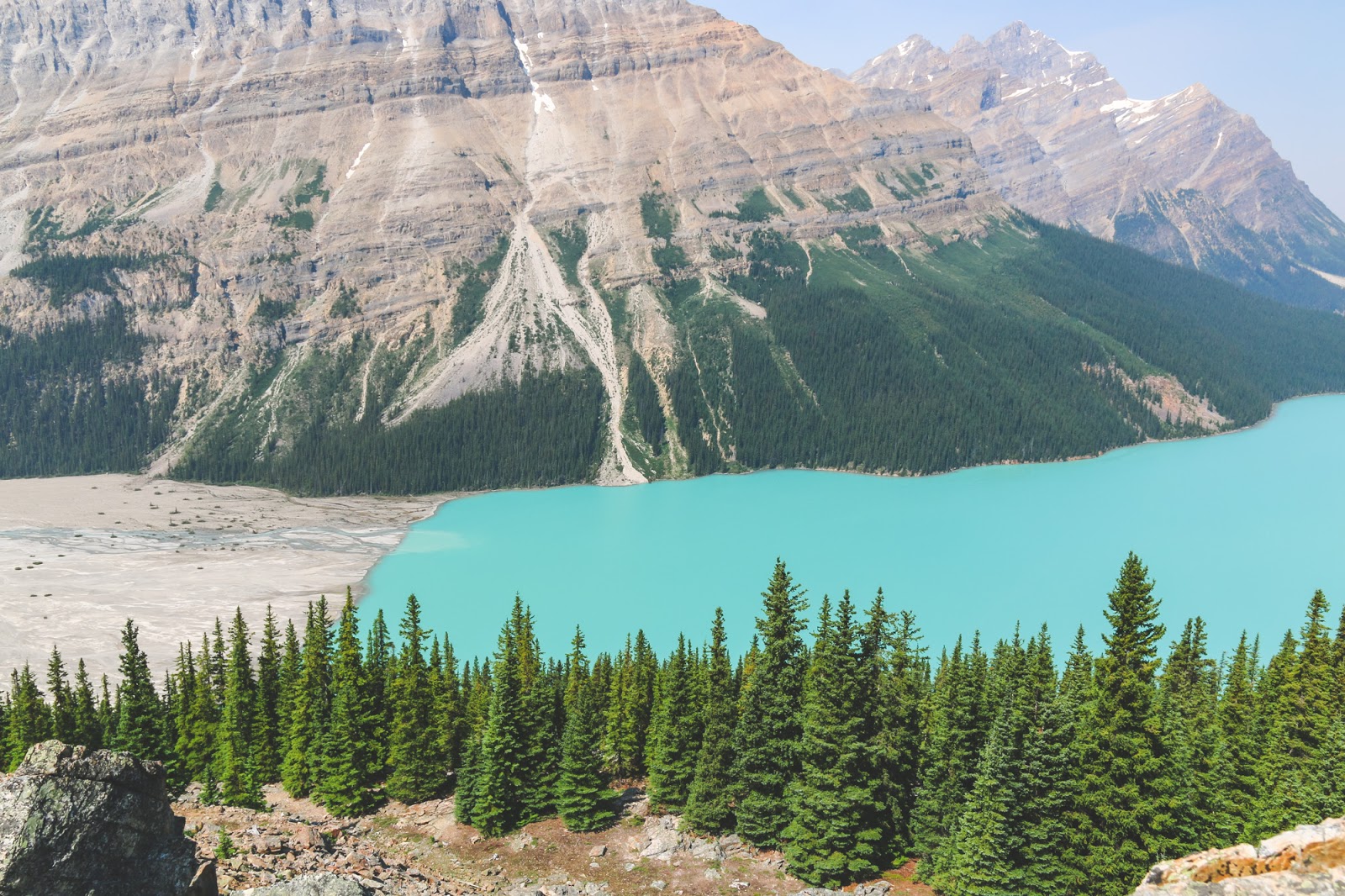 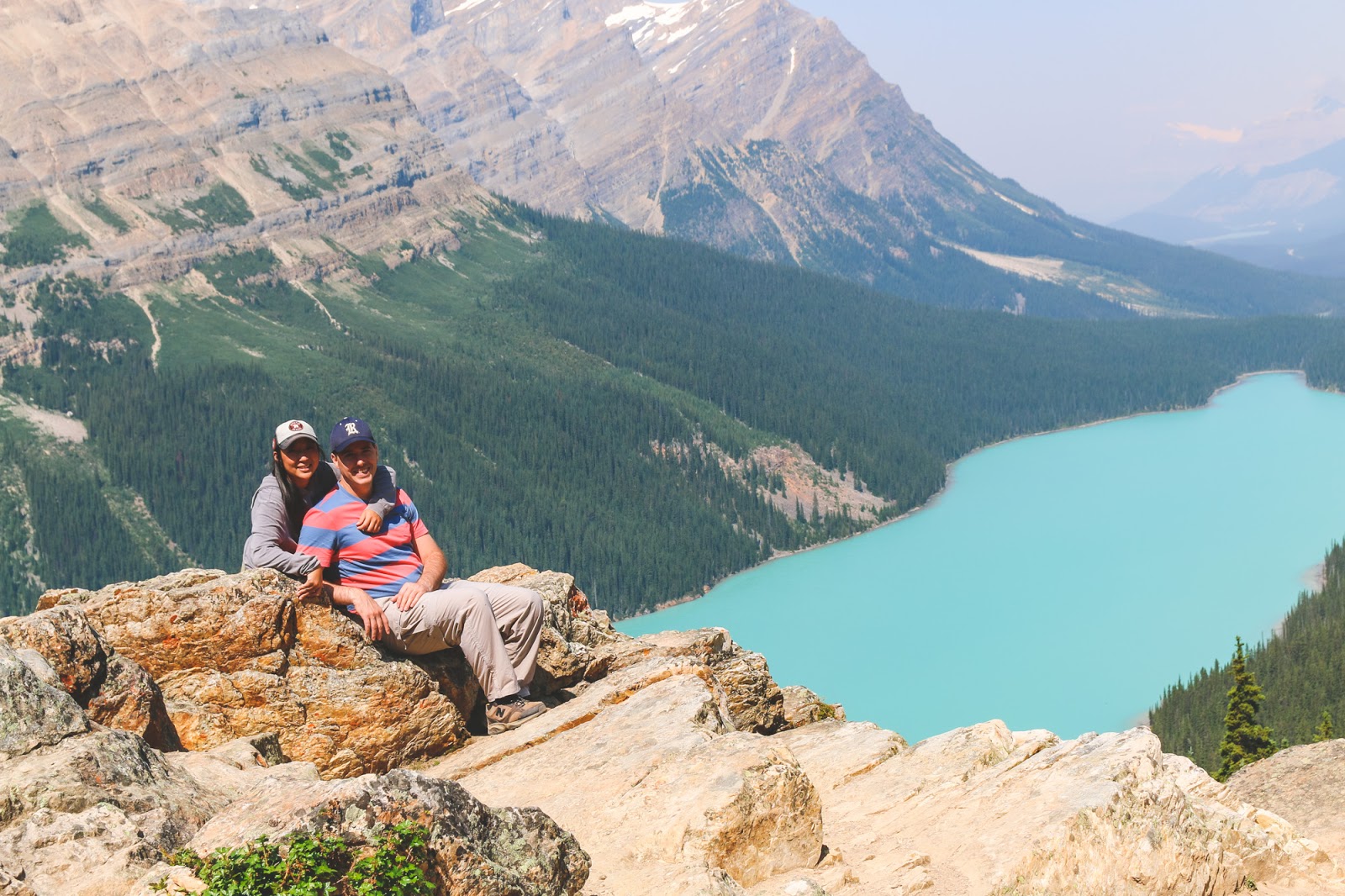 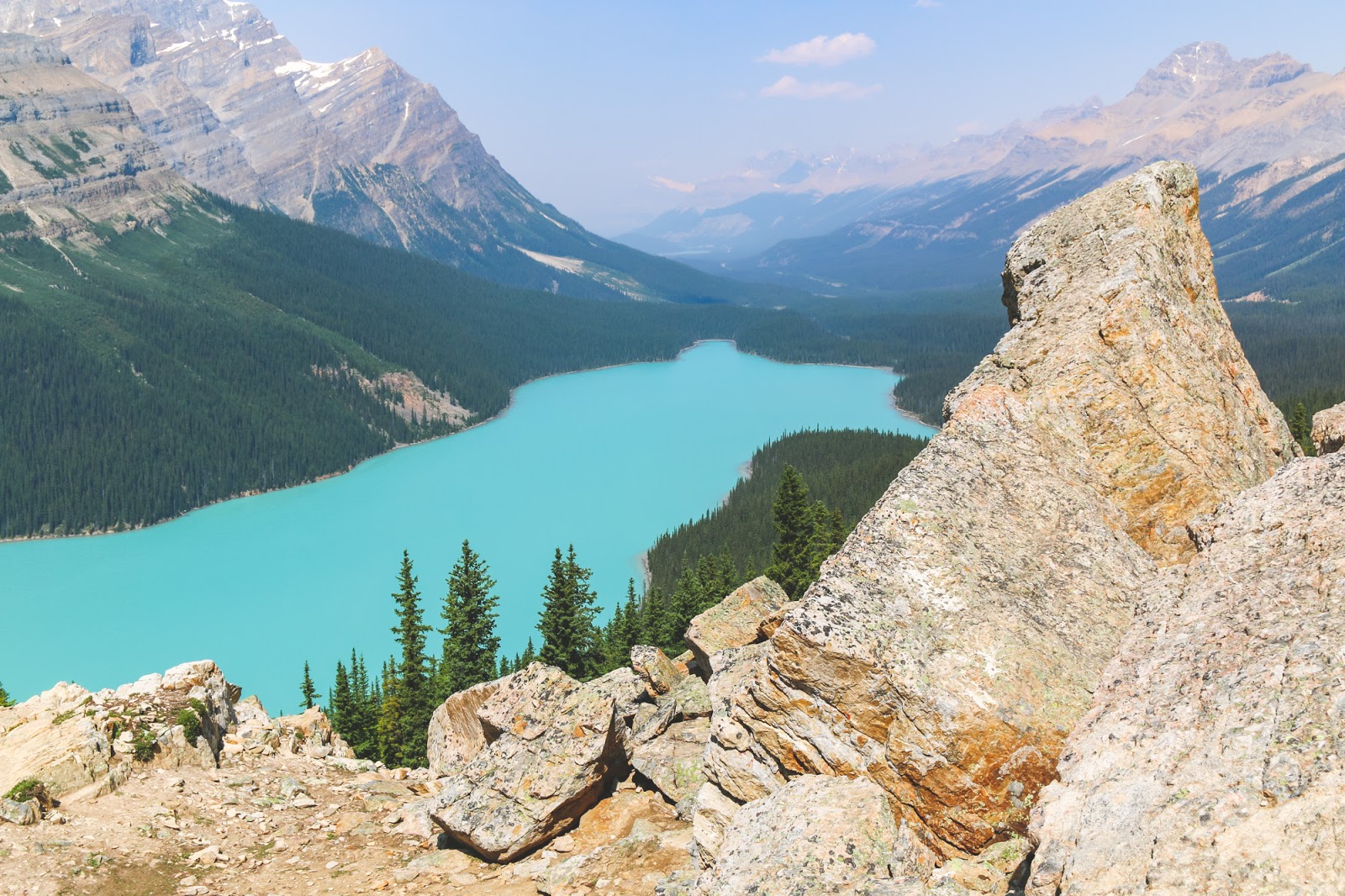 After following the trail towards Bow Summit, we found THE spot. There were a handful of other hikers already there and a few behind us, but there was plenty of room for everyone. The view was absolutely breathtaking and we didn’t have to fight people to get the perfect shot. Plus I think all the rock formations and evergreens add to the landscape and that is something you can’t really get down on the deck below. We spent a good amount of time there just admiring the scenery. After hiking in a canyon in the morning and now seeing this beautiful lake, Banff National Park is truly special.
THE RUNDOWN:
Once past the wooden observation deck, follow the trail until you see the sign below (last picture). At this fork in the road, go right until you see a tall skinny sign that says “Bow Summit” on it and with the same coloration as the previous sign. The tall skinny sign is off to the right hand side so be on the lookout for it, it can be hard to spot if you’re not looking for it. At this sign, follow the narrow trail until you get to the lookout, you can’t miss it. The same trail will lead you all the way to Bow Summit if you want to keep going after the Peyto Lake lookout. To get back, just backtrack your way back to the observation deck. My only warning, just mind the edge since there are no guardrails. A couple playing with their dog accidentally threw his ball over the edge. Don’t worry, the dog didn’t go after it but he was bummed that they lost his ball though.
Heading to Banff National Park? Definitely make the drive all the way to Peyto Lake, you won’t regret it! 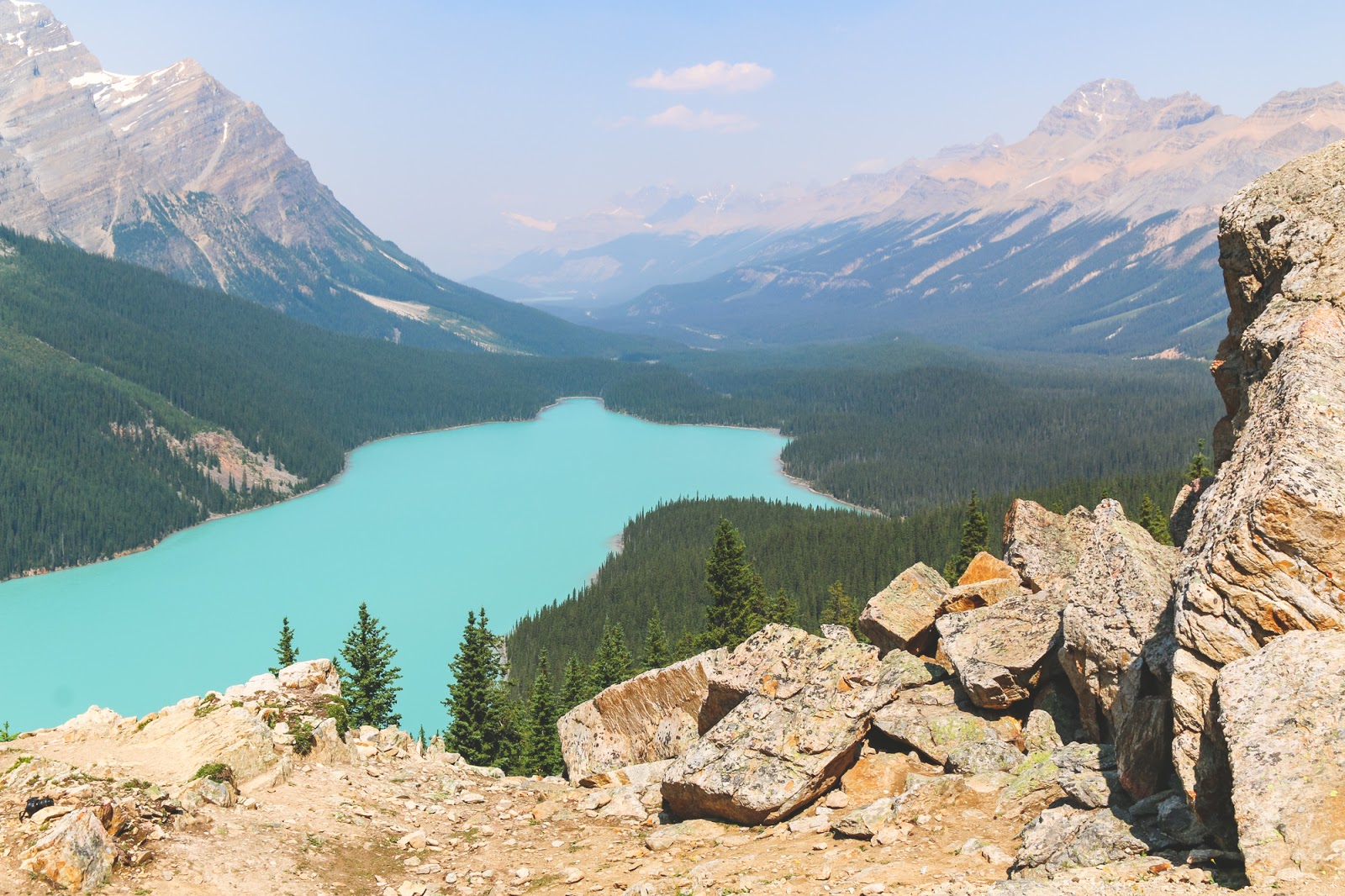 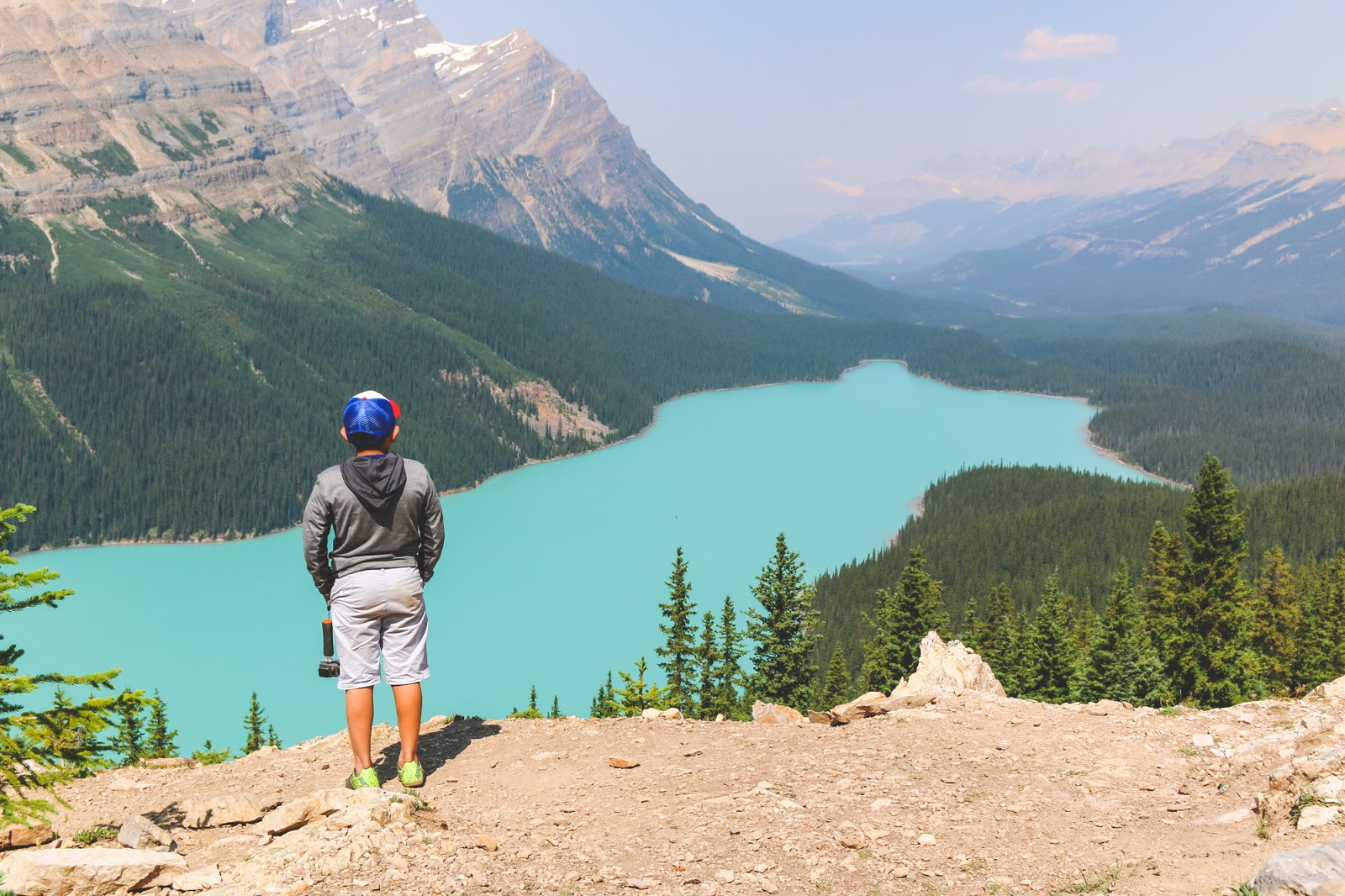 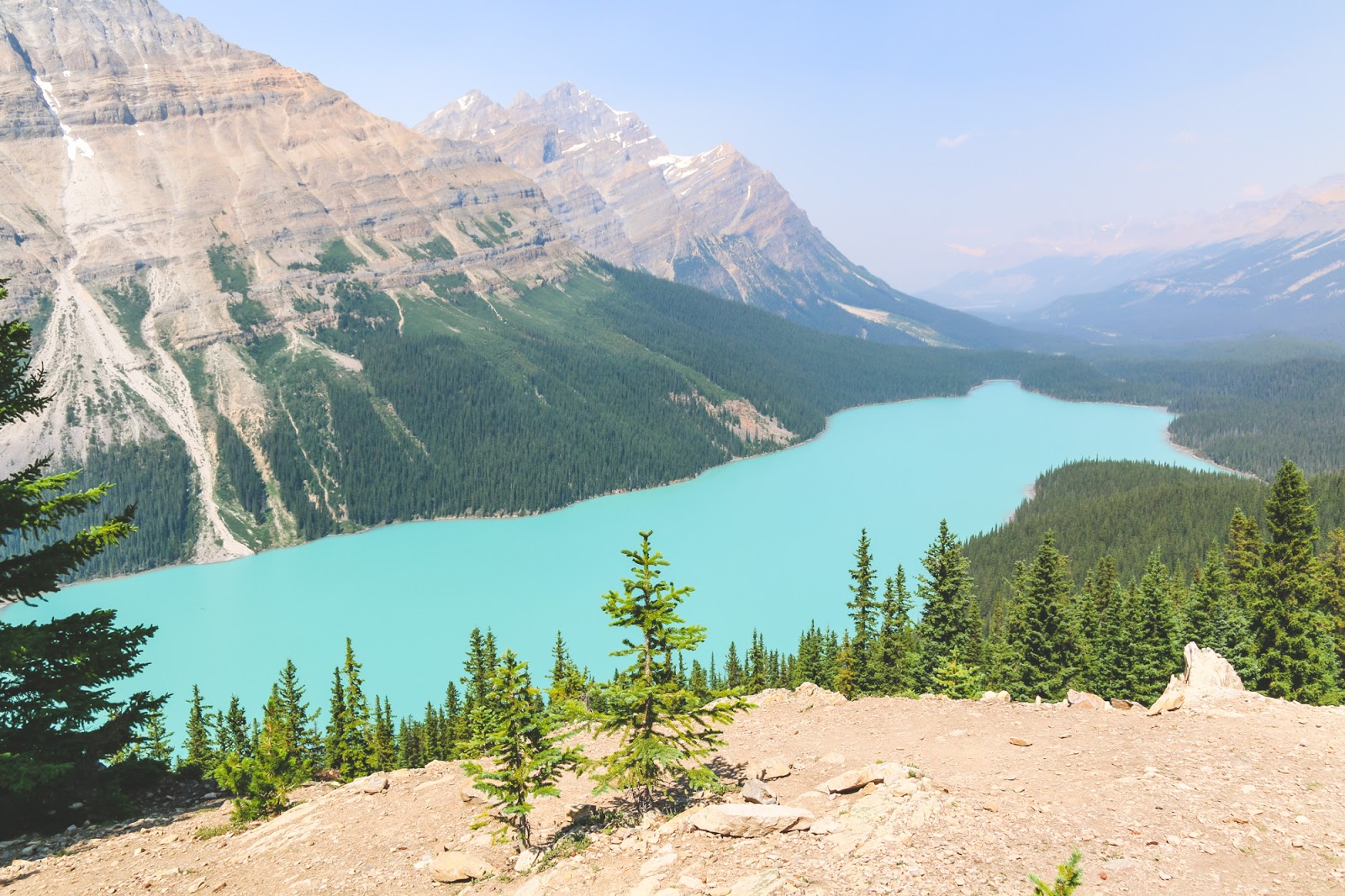 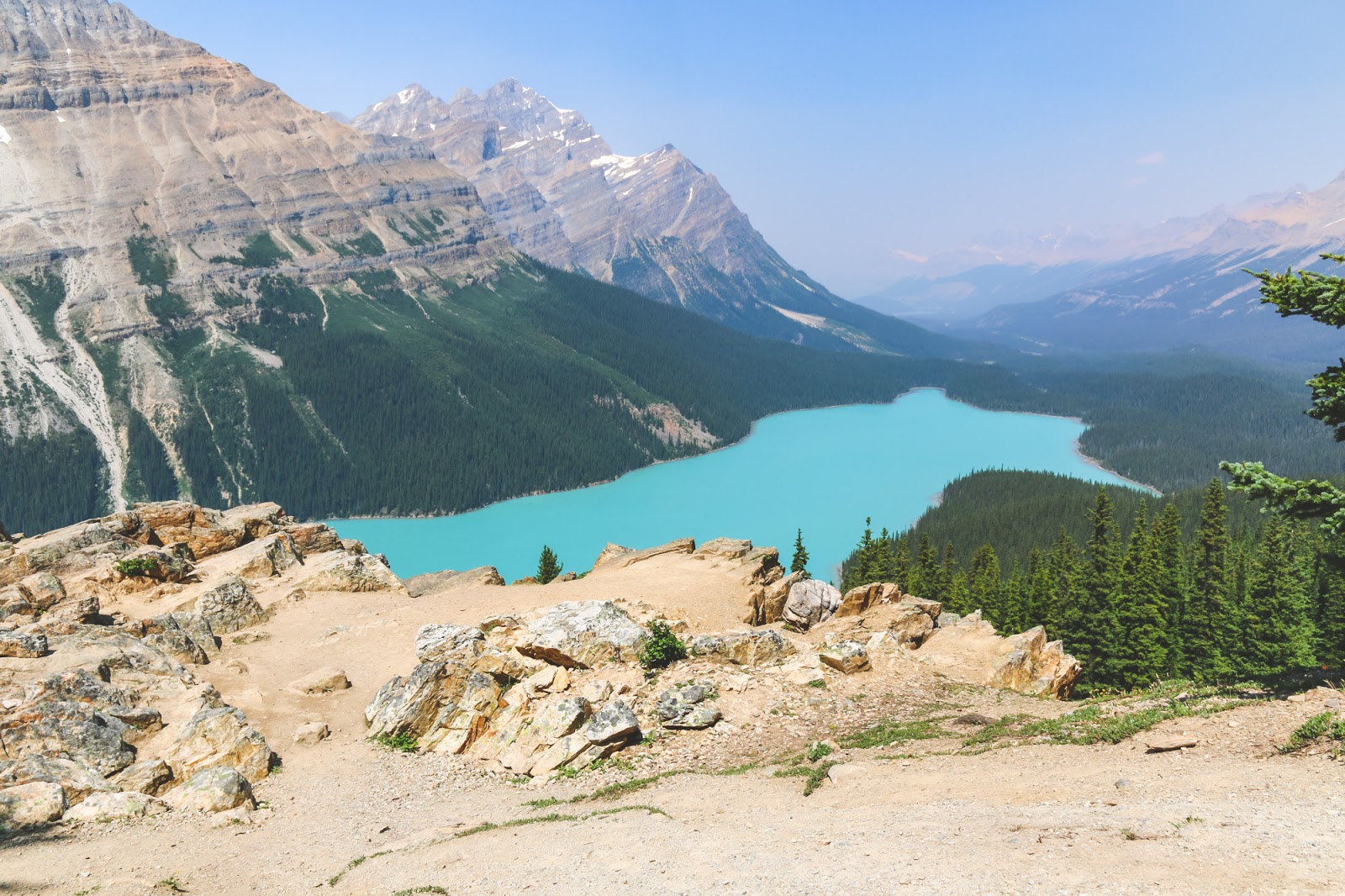 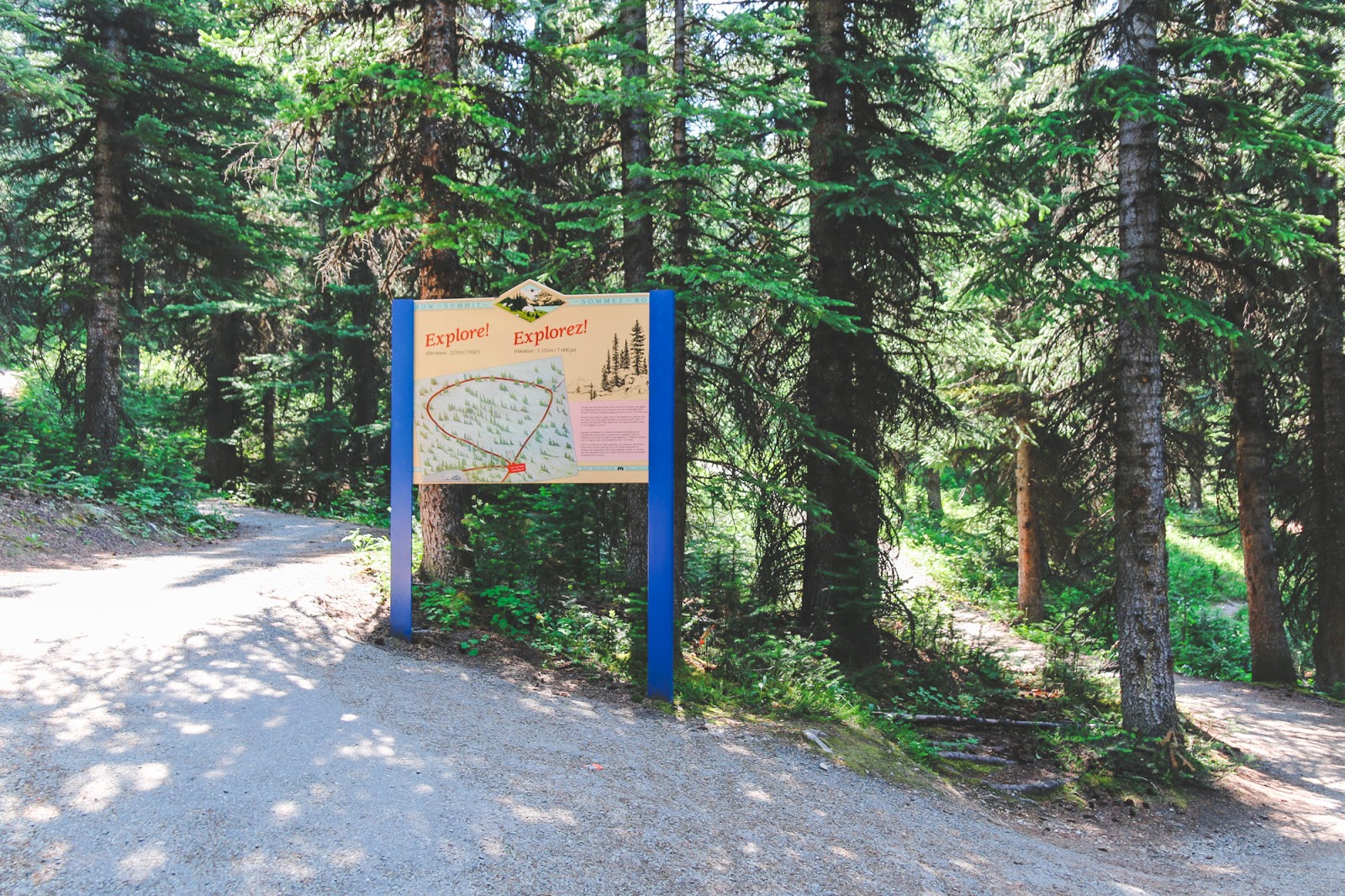 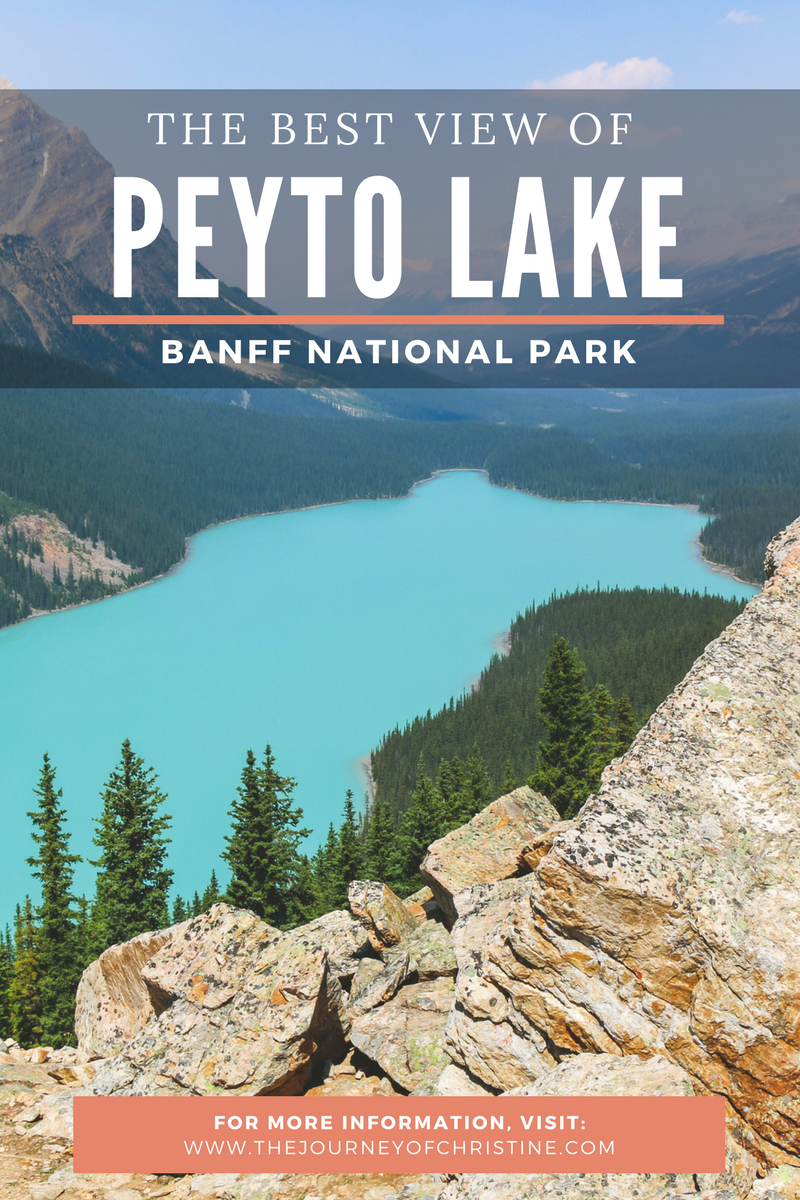 One of the highlights during our trip (we had many

It’s been a minute since I’ve posted on here!