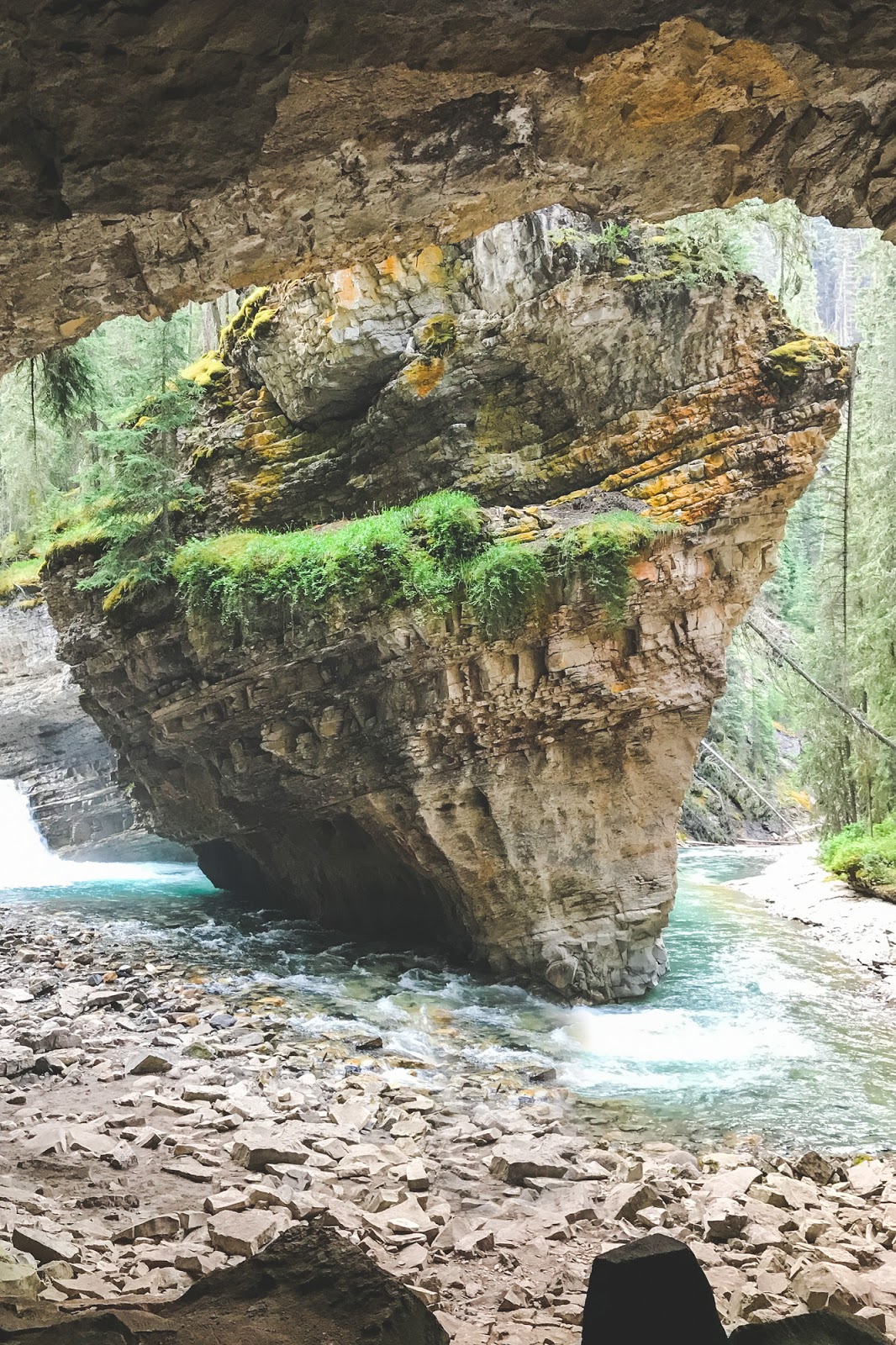 [Disclaimer: This post was published in 2017, and I have not been back to Banff National Park since then. At that time, the trail was not marked off and there were no signs prohibiting entrance to the “hidden” cave. This goes without saying, but please respect any and all signs and if that trail is now closed, please do not make your way through.]

When we booked our trip to Banff National Park, I really didn’t know much about the park except for its beautiful blue lakes (which was enough to make me want to visit). After telling a few friends and coworkers about the trip, recommendations came pouring in but one of them was not like the others. Johnston Canyon was the only one that didn’t involve a lake. Don’t get me wrong, I loved every second of all the lakes we visited and hiked, like Moraine Lake and Peyto Lake, but the idea of hiking in a canyon sounded so cool and different to me. And just like that Johnston Canyon was added to our itinerary.

While doing research on Johnston Canyon (which I will blog about next week), I found this amazing picture on Instagram. A picture of a dark cave, looking out at a waterfall, which turns into a stream that wraps around a rock formation that looks like it’s about to tip over at any moment. It’s the picture above and below, and it shows the power of erosion. I knew I had to see this amazing cave for myself but every time I saw a picture of it, people didn’t really give clearcut directions or any helpful descriptions on where to find it. So when the day came, I was a little nervous that there could be a chance that I would go home not being able to find this “secret” or “hidden” cave.

One blog post I read said the cave is located in between Lower Falls and Upper Falls which is kind of vague since it’s a mile in between the two falls. Another post I read said to “take the trail right after Lower Falls and it will lead you to the cave”. Well right after Lower Falls, I was on the lookout for this trail and I thought I found it but the trail we took lead us to above the tree line which was a nice treat, but it was hard to fathom how a cave could be so high so we turned around (thankfully). After already hiking for so long and then going in the wrong direction for another 30-40 minutes, I just said forget it and told Lyndon and Aiden that we should just head back to the main trail towards Upper Falls and if we run into the cave, great, but I didn’t want to waste anymore time trying to look for it. If we had all day, then I wouldn’t mind hiking all over Banff National Park to find it, but we wanted to drive north to Peyto Lake afterwards so we had somewhat of a timeline to follow. So we double backed and started walking towards Upper Falls. Aiden was pretty bummed cause he really wanted to see the cave, I think maybe more than me, but I made peace with my decision and knew I would be back someday.

As we hiked our way to Upper Falls, I could see and hear the creek through the trees below us. Unlike the hike to Lower Falls where you are in the canyon and directly above the creek, the trail to Upper Falls is more elevated and you’re outside of the canyon walls surrounded by trees. Both portions of the hike are equally as scenic and offer something for all hikers. Just when I was getting a little excited about getting close to Upper Falls, I noticed a small trail leading down towards the creek. I told Lyndon and Aiden to stay back while I checked out the trail and to see if anything down there was picture worthy. About halfway down, I noticed something very familiar. I could not contain my excitement and yelled up to the boys to come down. After spending all that time and obviously going in the wrong direction, we finally found the cave! 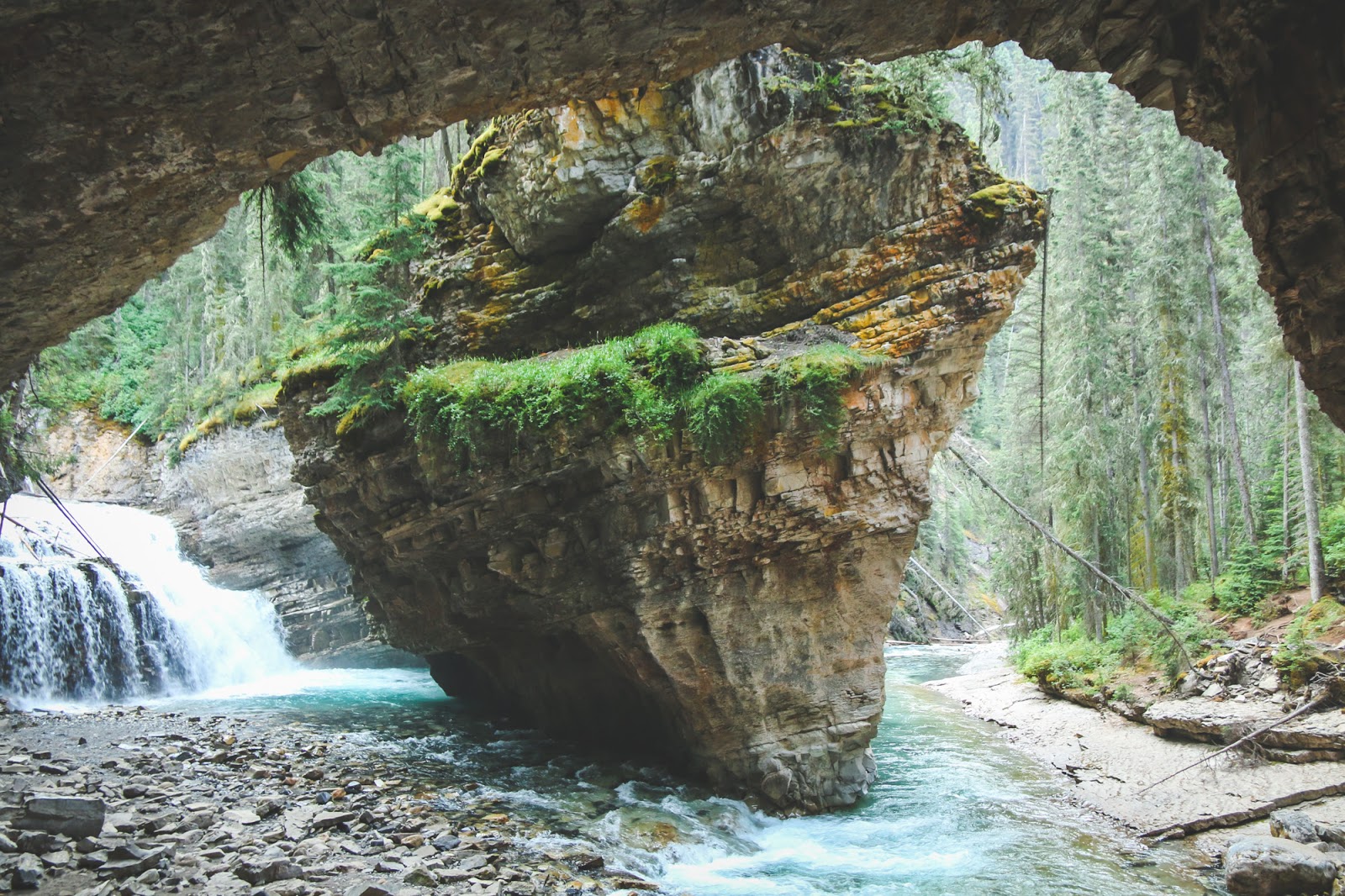 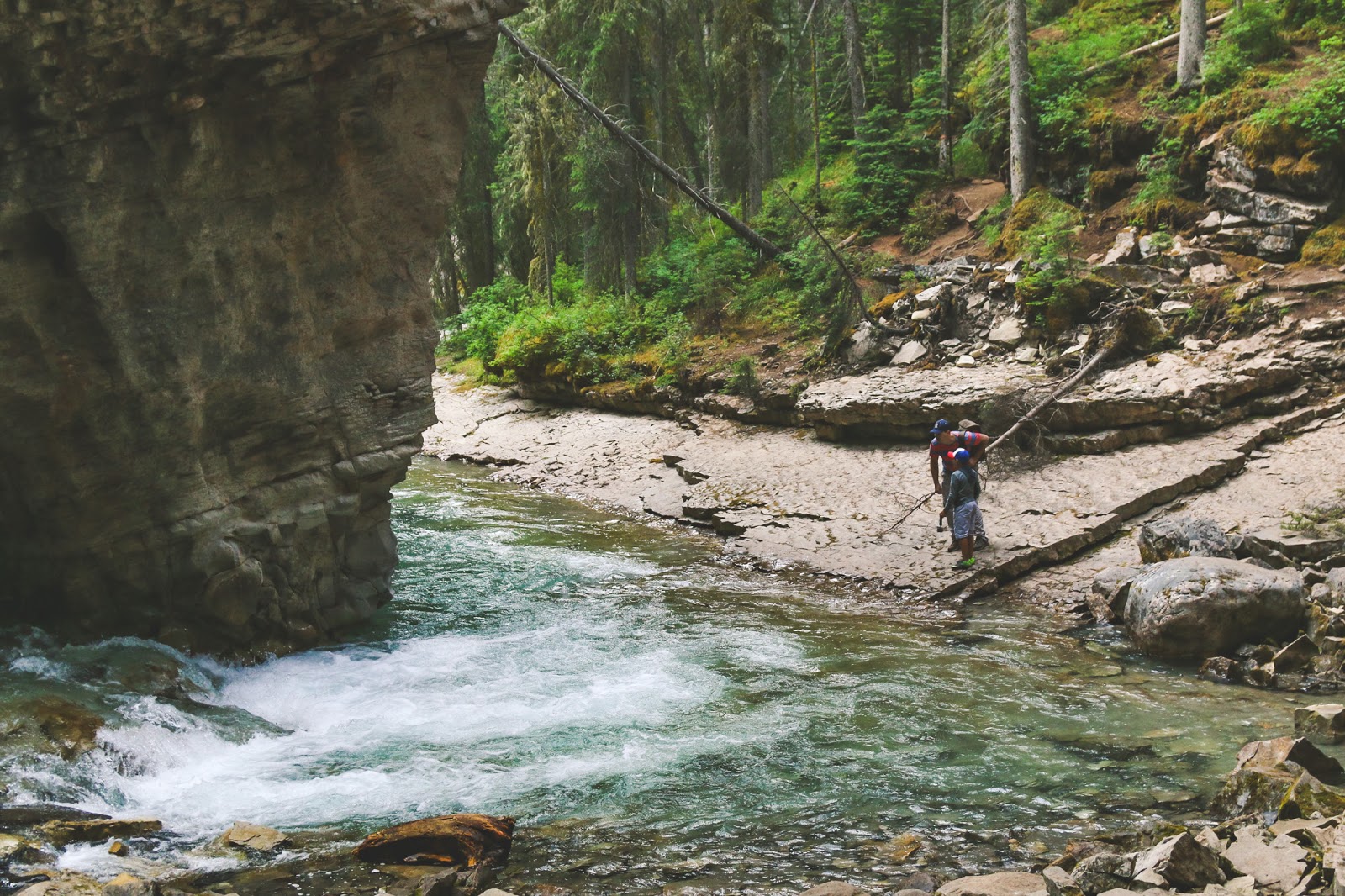 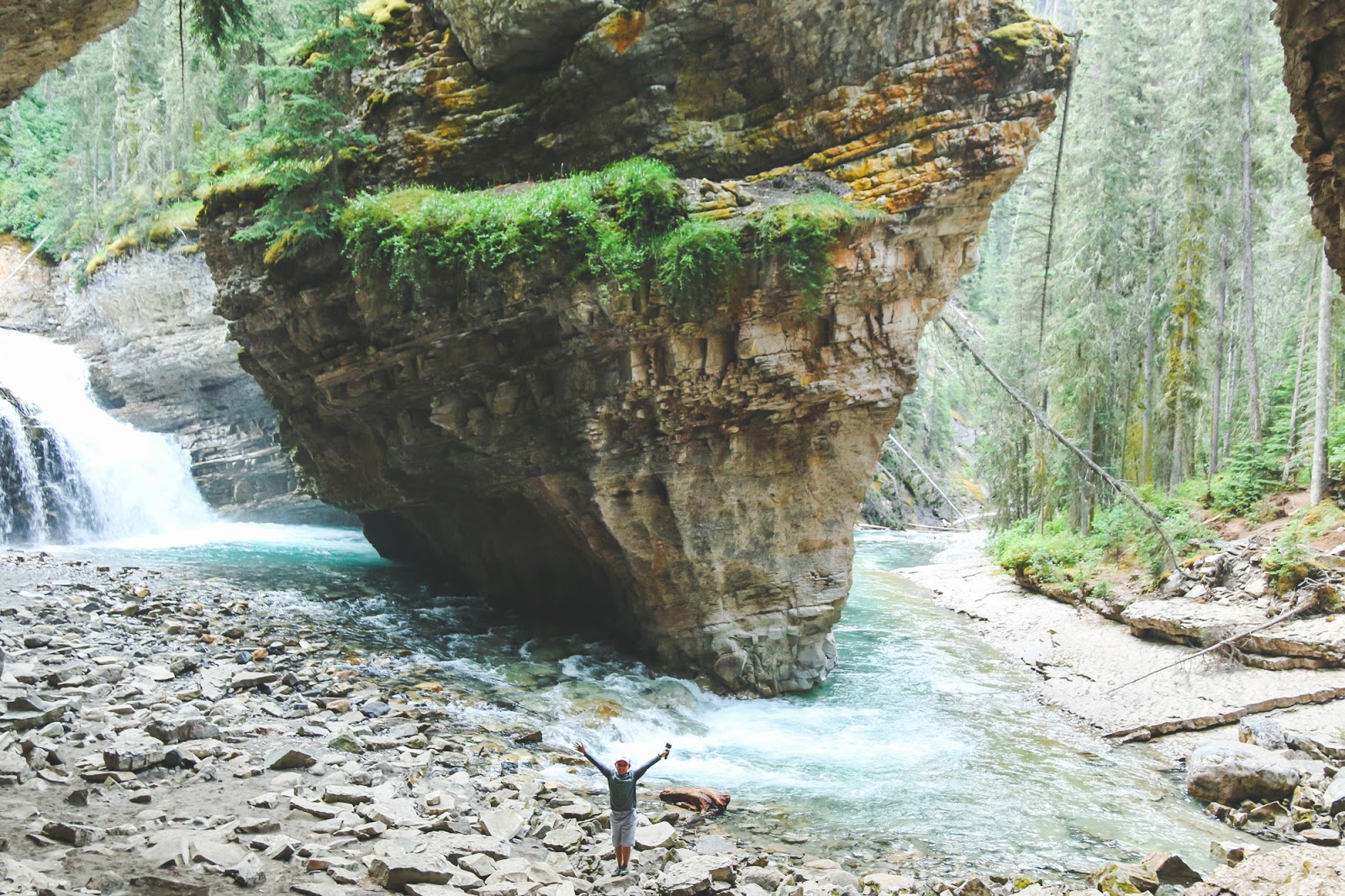 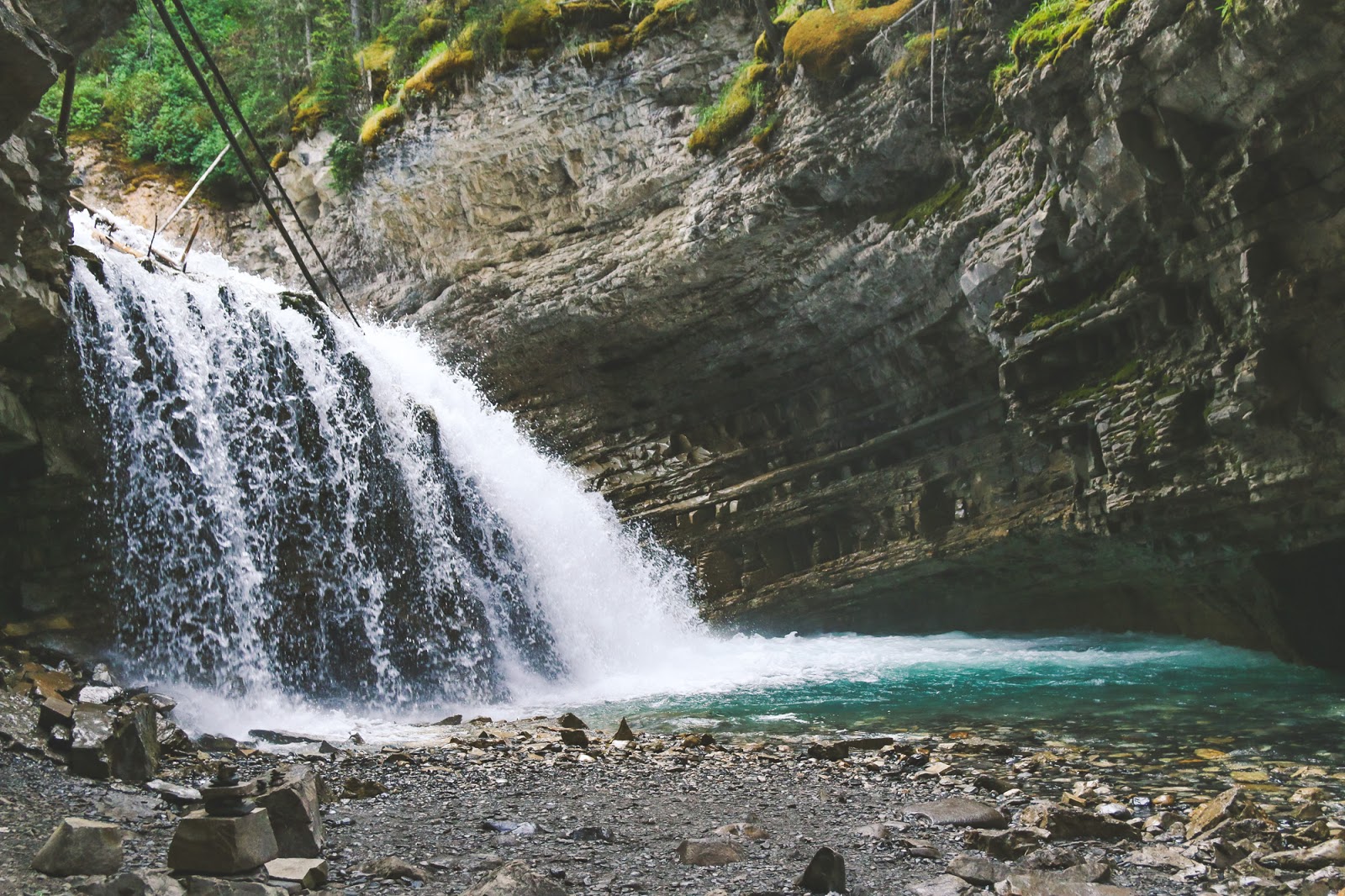 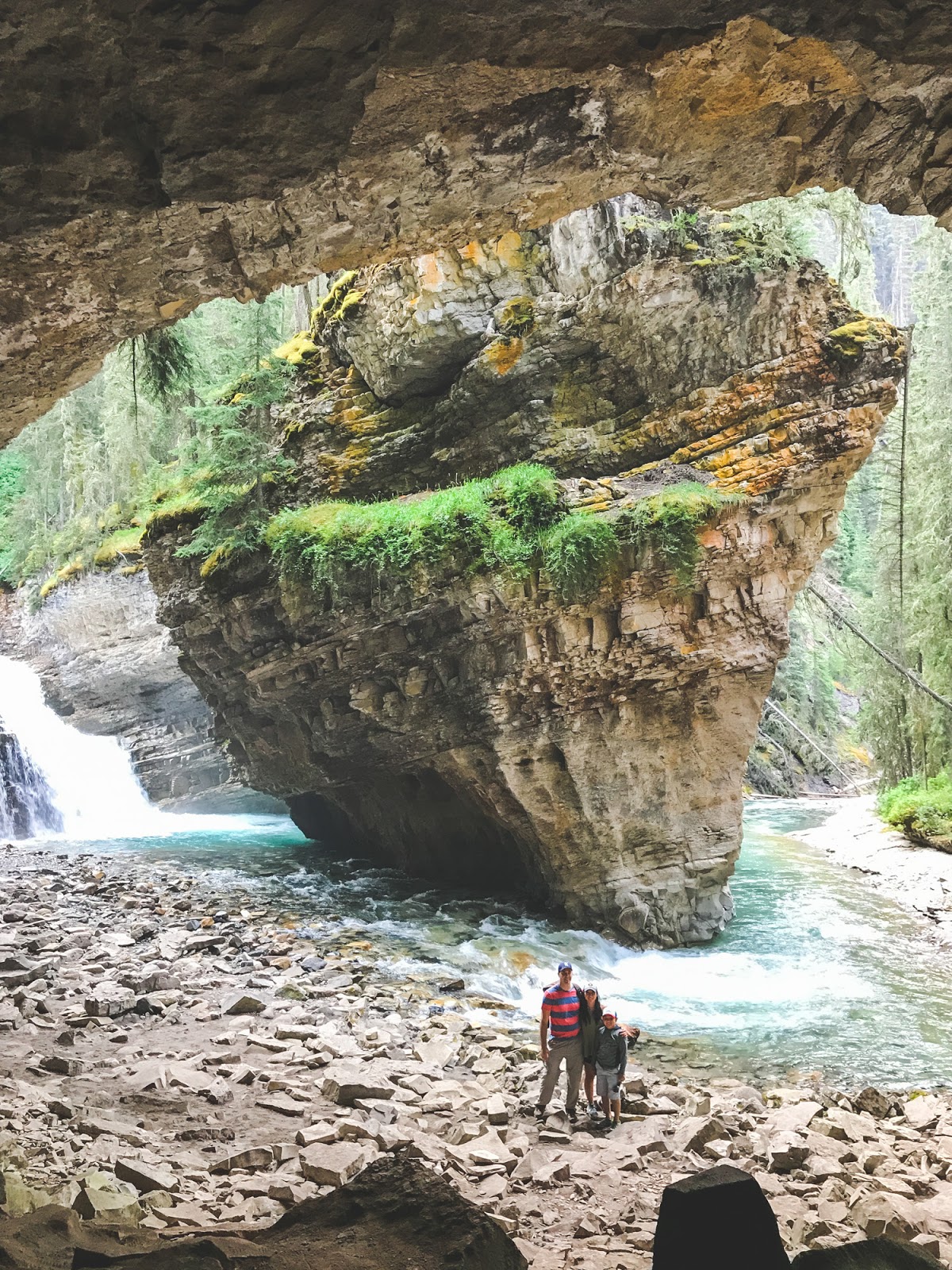 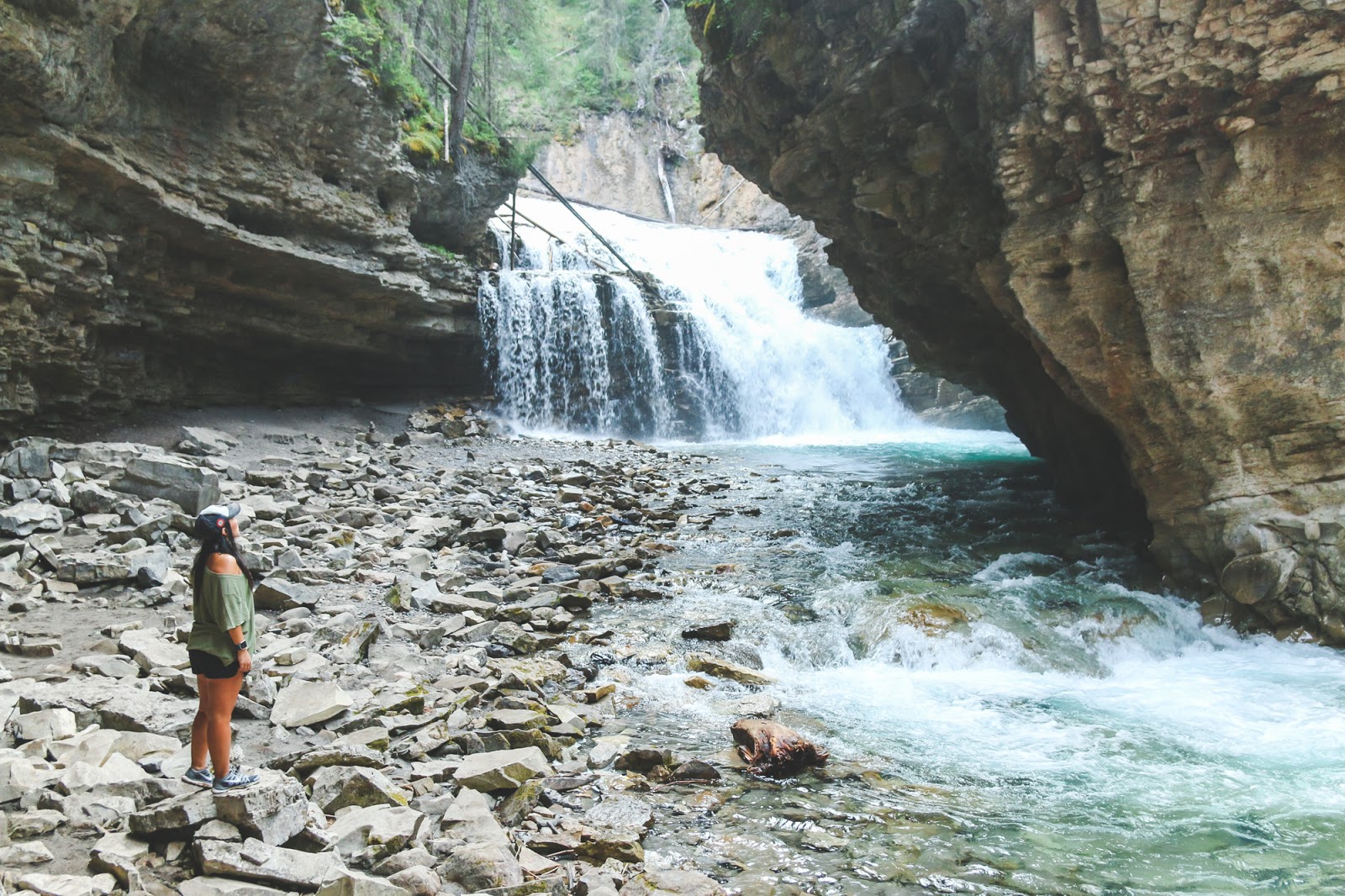 We made our way down the makeshift steps and trail that formed after years and years of foot traffic. Be careful when going down, the trail is a lot steeper than it looks especially if you’re not wearing hiking shoes. I was wearing my running shoes and the smooth dirt was pretty slippery. Once down by the water, the view is breathtaking. Honestly, after seeing countless amazing pictures of this cave, it’s nothing like seeing it in person. I was in awe the entire time, and I could tell Lyndon and Aiden felt the same way. Even though we spent some time in the wrong direction, everything was worth it in the end. We spent a good amount of time down in the cave, either taking pictures or just walking around to the waterfall or along the creek.

There was no one down by the cave when we got there but shortly after we arrived, two guys made their way down with their cameras and tripods. It was just the five of us for a while until a girl and her cute dog came down. By the time, we were ready to leave a small crowd started making their way down. I think once people are already down by the cave, it is a lot easier to find. You can hear voices or see people entering or leaving the dirt trail. On the way up, there were so many people trying to get down that Lyndon decided to go a different way since the trail is pretty narrow. I followed him and since I’m a foot shorter than him, it was not the best idea. If I thought the original trail was steep, this new way up was straight El Capitan status! My short legs couldn’t compete and places where he could take one big step, I had to get on my knees and grab on to random branches. I finally made it up with lots of help from Lyndon and by the time we got to the top, Aiden was already up there giving us a weird “why did you go that way” look. He waited for the crowd to pass and just went up the original trail which is what I should have done… note to self!

So if you’re going to Banff National Park, you should definitely a. hike Johnston Canyon, and b. check out this (not so) hidden cave! Johnston Canyon alone is so cool but this cave is amazing!

HOW TO GET TO THE HIDDEN CAVE:

After enjoying your time at Lower Falls, follow the main trail towards Upper Falls. After about 10-15 minutes or so, keep an eye out for a dirt trail on your righthand side. If you get to an area where you can see the large triangular rock formation from above (the one that looks like it’s about to tip over), you missed the trail and need to turn around. Below are pictures of the dirt trail from the main Johnston Canyon trail and from below in the cave, be on the look out for it. It’s a pretty distinct dirt path but with all the trees around, it could be easy to miss. If you can hear or see people below, you’re on the right track. In the winter time, it might be easier to see the creek and cave from above with trees having less leaves but a lot of these trees are evergreens so it might not make a difference. Be careful going up and down especially if you’re not wearing hiking shoes or have trekking poles. The dirt is slippery and the trail is pretty steep in some areas. Give yourself at least two hours to make this hike and back (longer if you want to go all the way to Upper Falls afterwards).

Hopefully these directions will help you get to this amazing place. While you definitely have to keep your eyes peeled, once you see the trail, it will look so obvious. Most importantly, make sure to spend some time down in the cave and explore! From the cave to the waterfall to the stream making almost a u-turn, it’s nature at its finest. 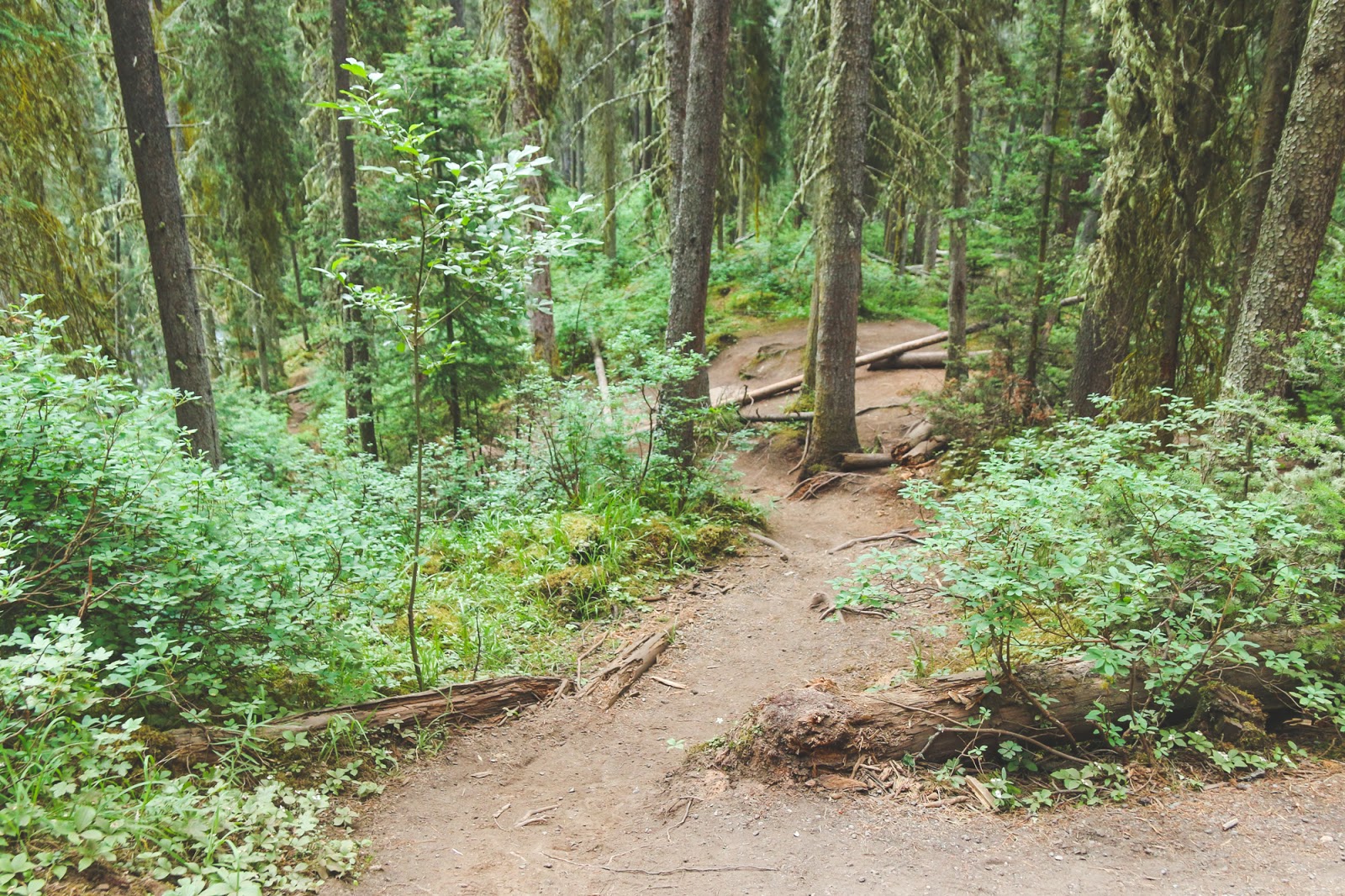 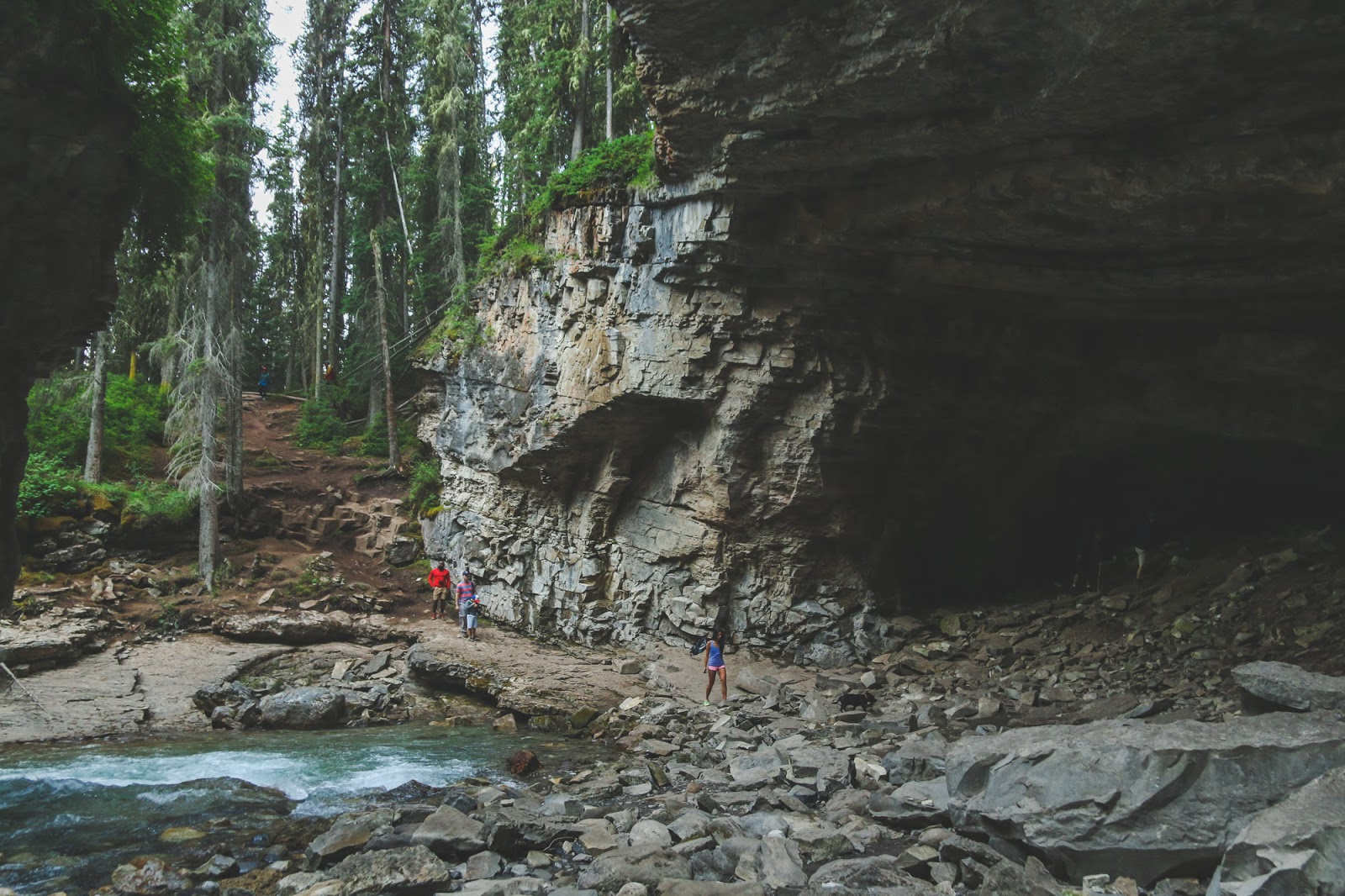 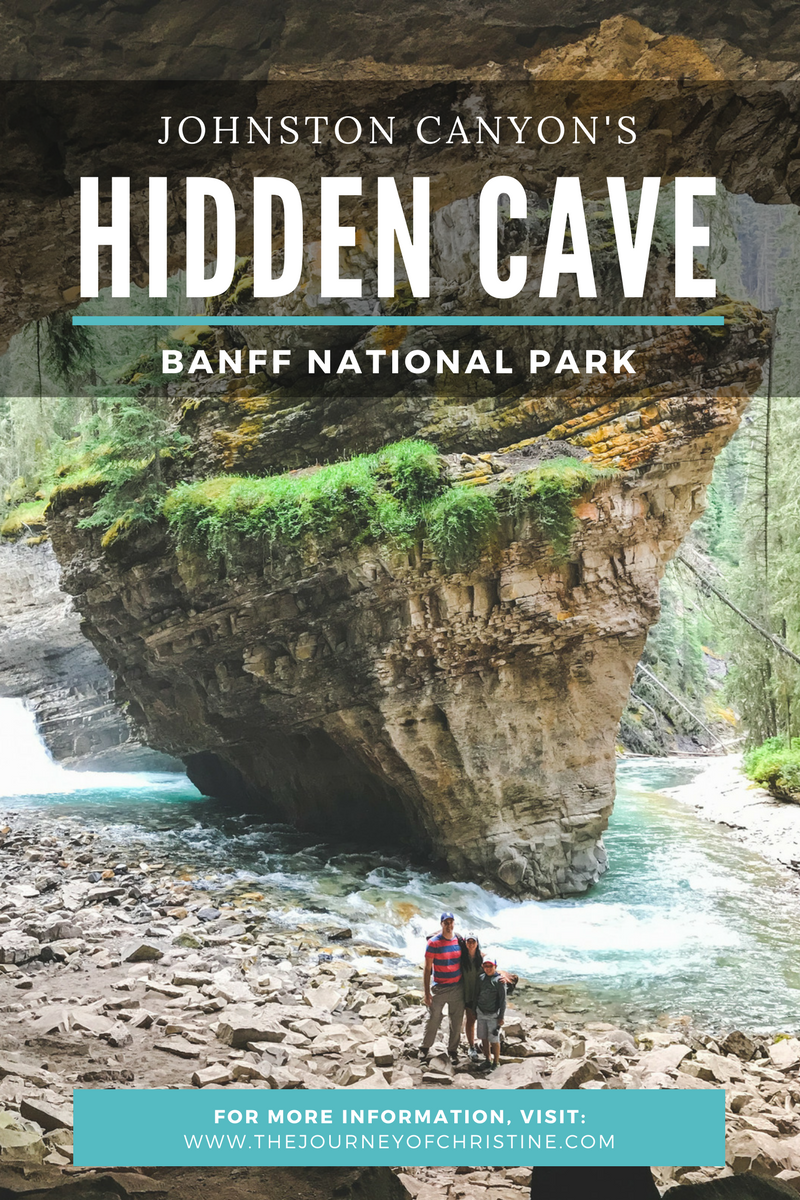