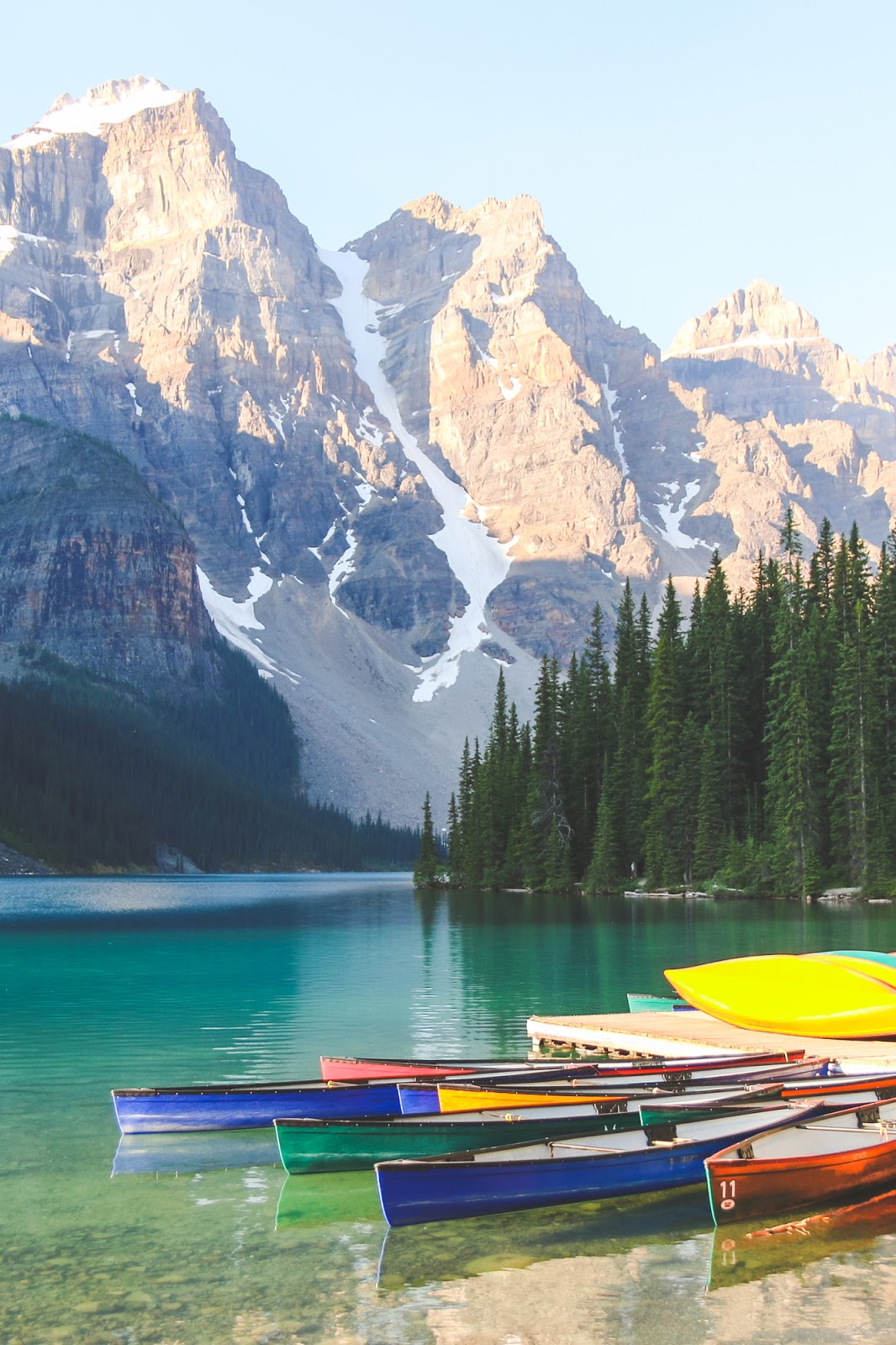 I love lakes, and I’m a sucker for ones surrounded by mountains and evergreens every single time. I love hiking to see these alpine lakes but when I also get a chance to be on the water, sign me up. I’ve been boating in Hallstatt, Austria and took a ferry on Lake Konigssee to hike Berchtesgaden National Park, and those are two of my favorite travel experiences to date.

Moraine Lake is a glacially fed lake and is known for its insane picturesque views. It was featured on the 1969 and 1979 Canadian $20 bill and is one of Canada’s most photographed locations. It sits in the Valley of the Ten Peaks so not only do you get the pristine blue water, but you also get the dramatic Canadian Rockies as its backdrop.

Just hiking Moraine Lake alone is an adventure but after finding out you could also rent canoes there, I made sure I didn’t leave Canada without crossing that off my bucket list. You can also rent canoes at nearby Lake Louise but since Moraine Lake is smaller in size and less crowded (which is still crowded), I opted for the more intimate experience.

From the town of Banff, Moraine Lake (and Lake Louise) is an hour drive north. We arrived at the lake around 8:30 in the morning and the parking lot itself was already full, but we were lucky enough to find road side parking. Unlike some lakes/hikes, road side parking at Moraine Lake is limited. The road that leads you to the lake is super windy which doesn’t leave a lot of room for parking. My advice, get there super early (that’s my advice for pretty much anything). Once the parking lot gets full and all the road side parking is gone, they close off the road to the lake and you are stuck either waiting it out until the evening or taking a $20/person shuttle. You could also head to Lake Louise instead, they have a free shuttle which is better than $20.00.

Before our trip, I read online that the canoe rental shop didn’t open until 10:00. Since we had an hour and a half to burn, we hiked around the lake for a bit. Once we made our way back, I noticed a line had already started to form at the canoe rental. I immediately jumped in line. Turns out, they open at 9:30… so much for the internet. While standing in line, I started talking to the guy next to me and his friends. They tried getting to Moraine Lake two afternoons in a row and both times, the road to the lake was closed. I guess they learned their lesson on day 3. 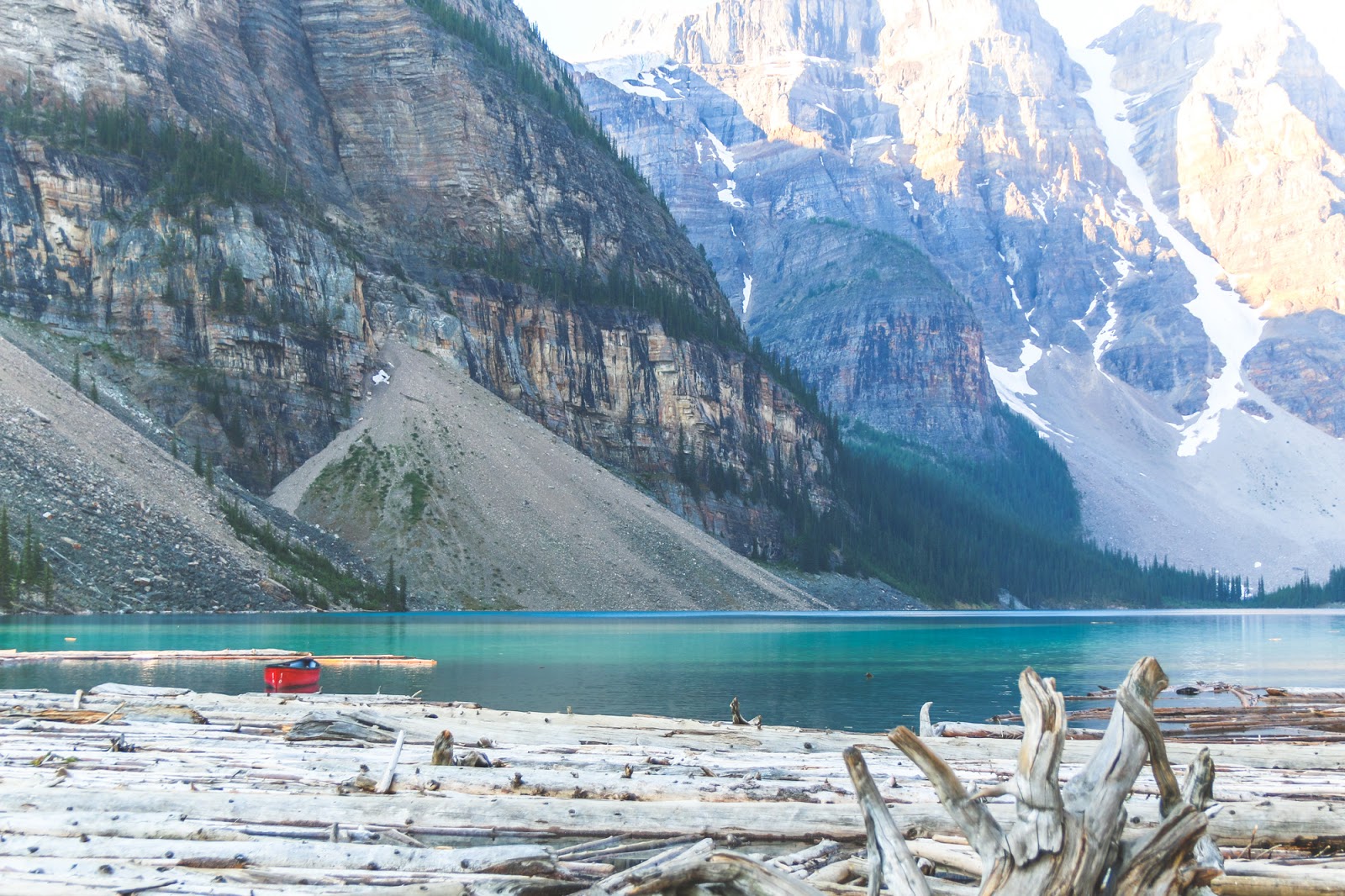 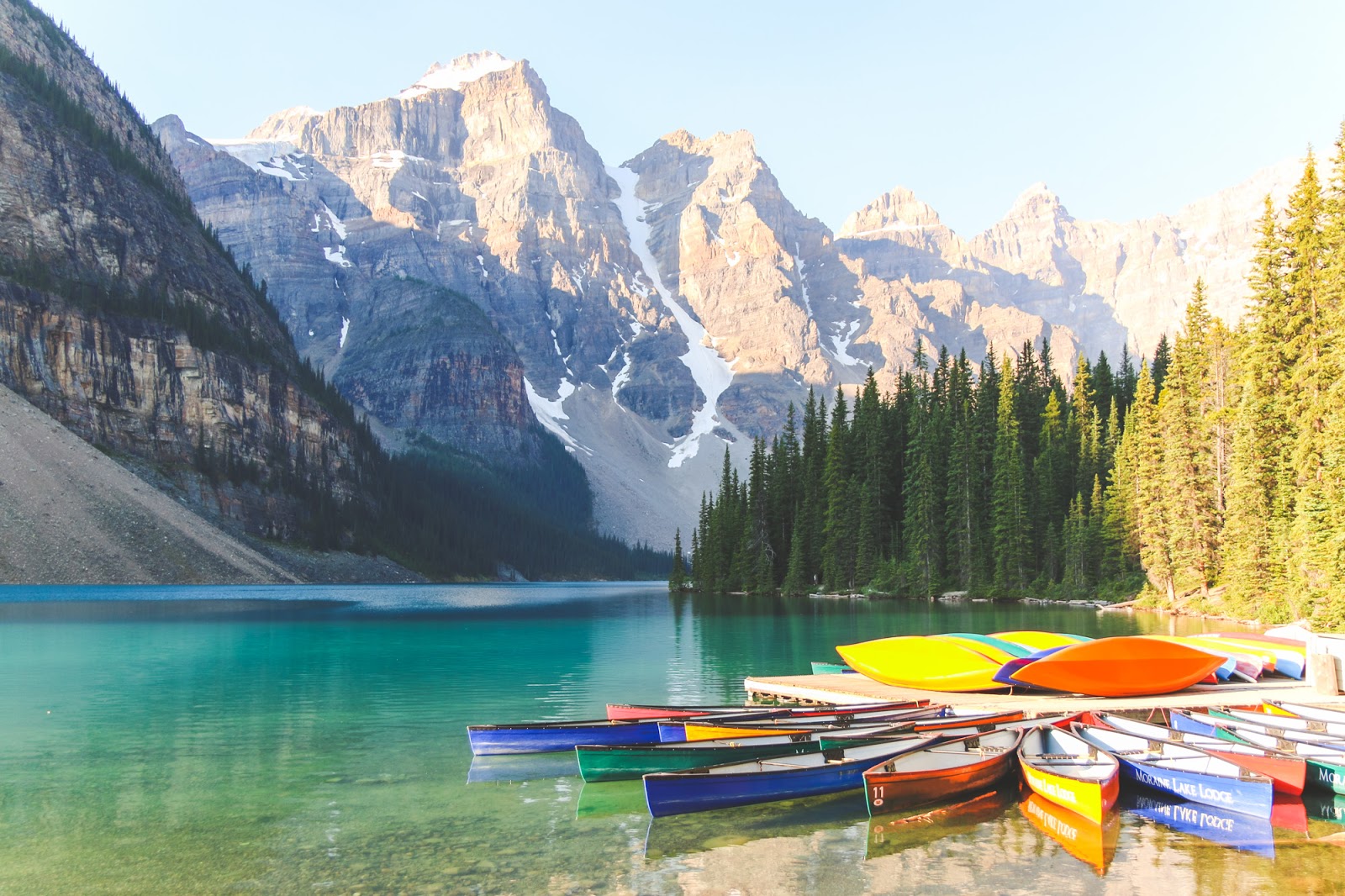 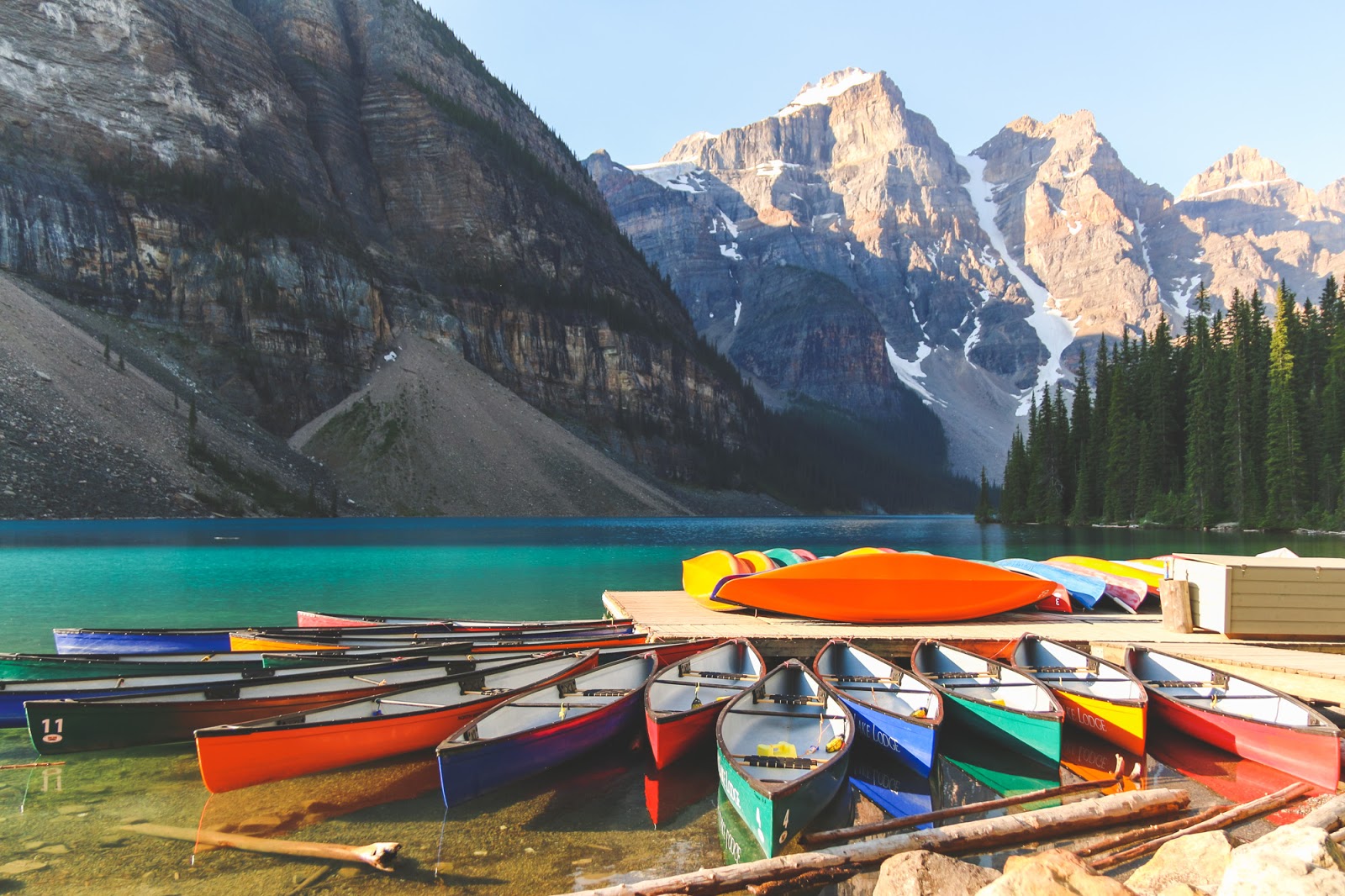 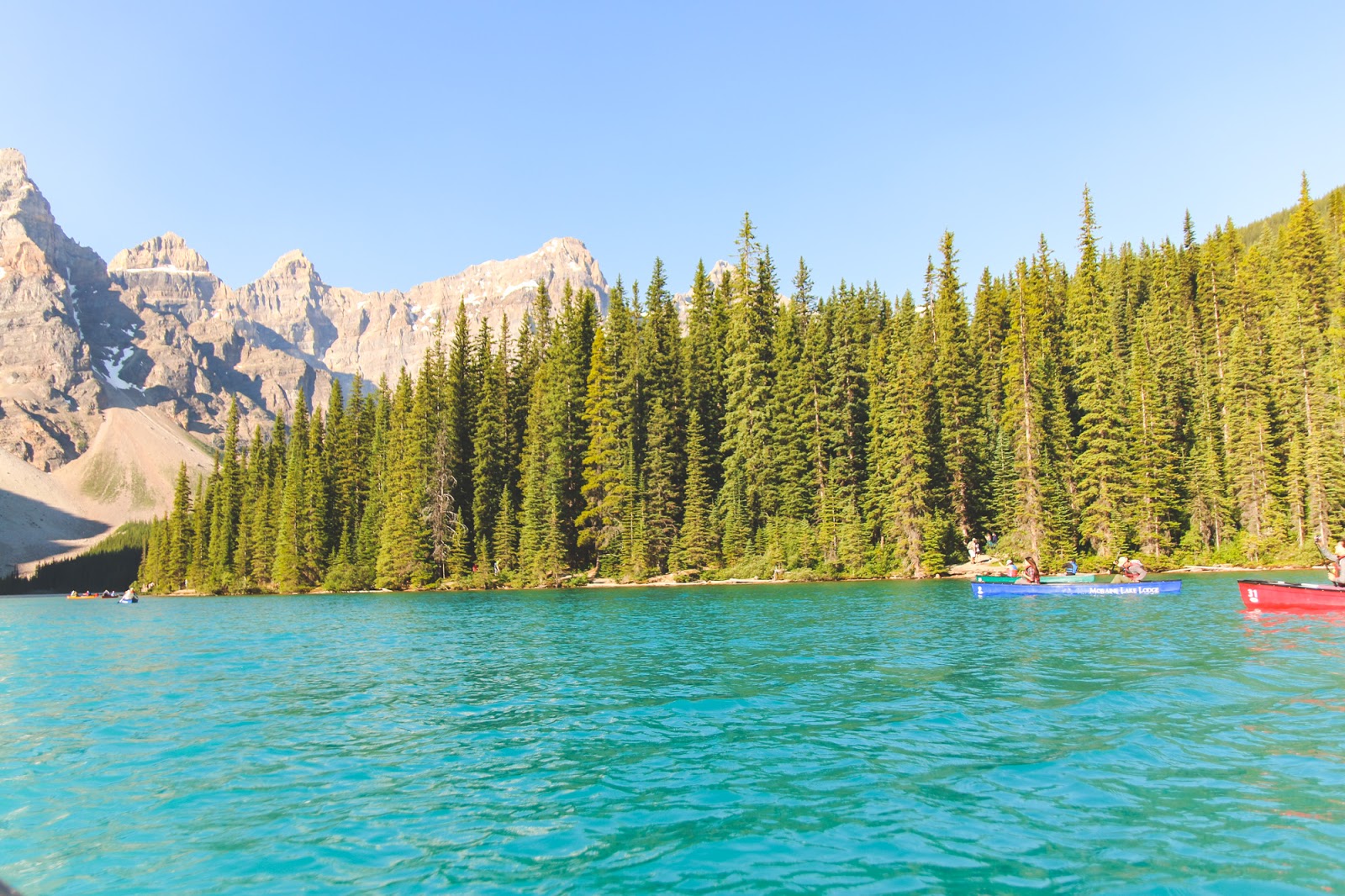 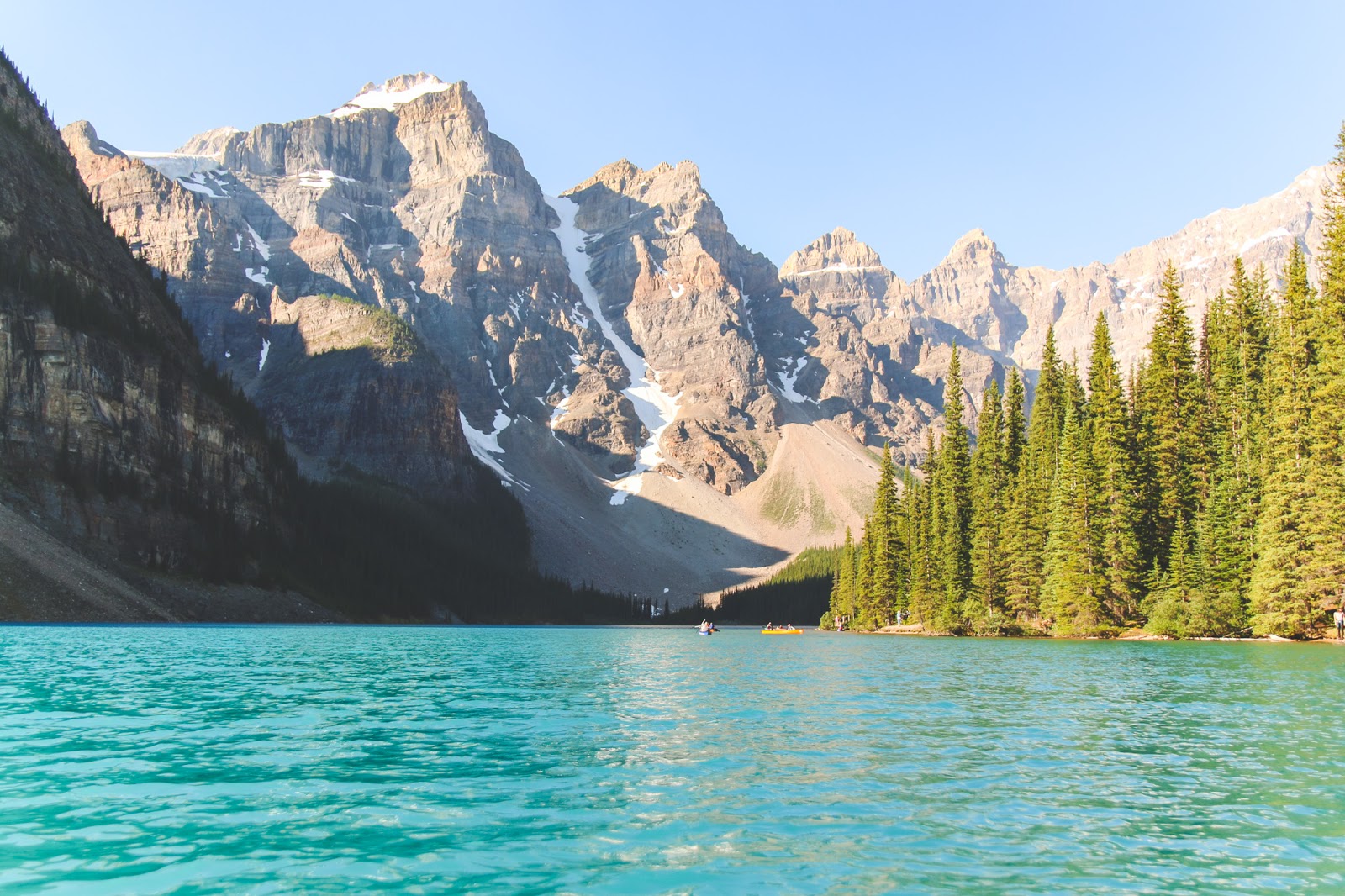 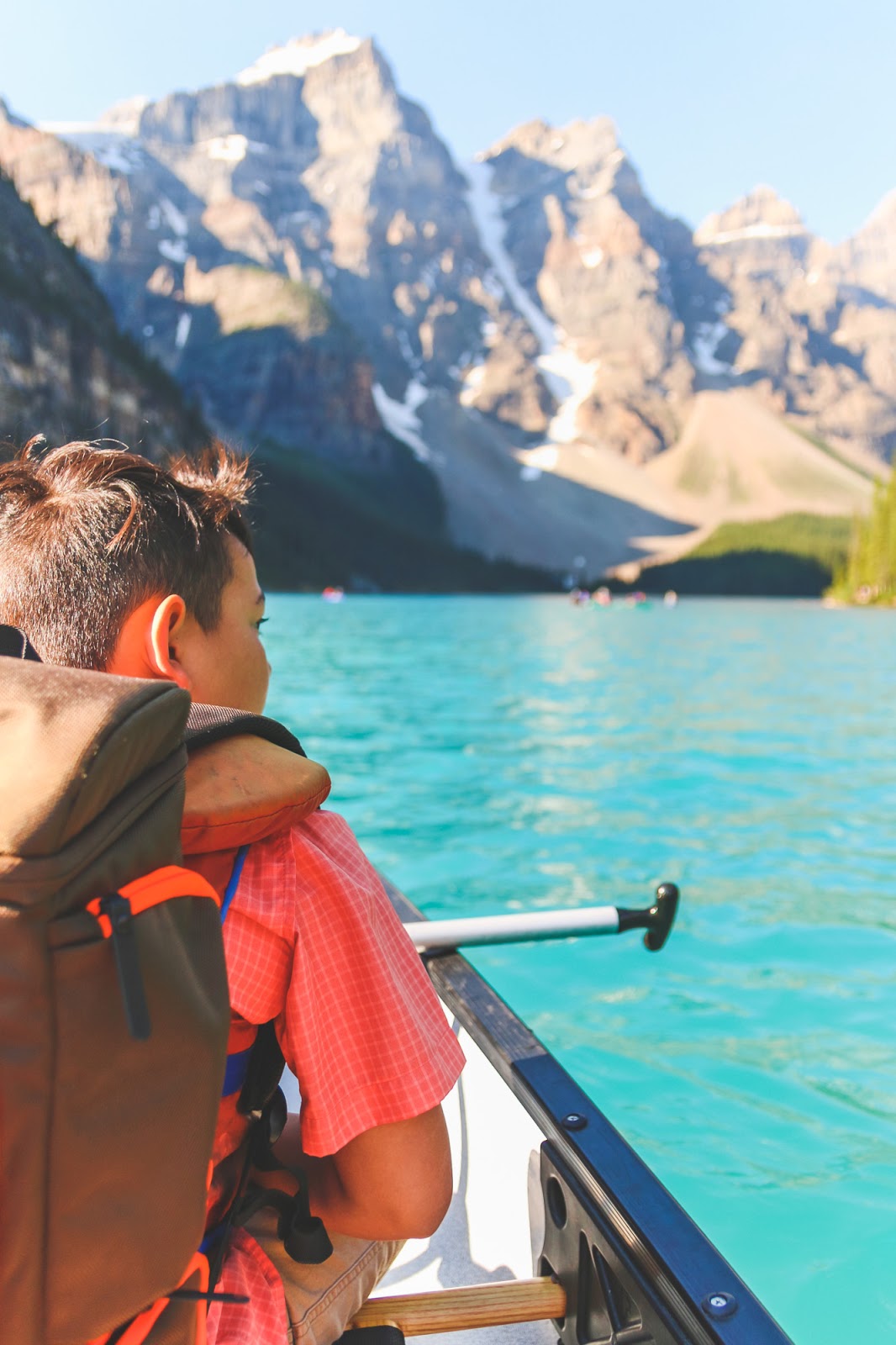 Finally, it was 9:30 and it was go time. The rental is $90.00 Canadian dollars per canoe per hour. They have 2-seater and 3-seater canoes and are pretty strict about it. A dad wanted his family of four in one canoe and they wouldn’t let him. They do take credit cards and of course cash but if you pay in US dollars like the guy in front of me tried to do, they can’t give you change. He didn’t have his credit cards with him and all he had was a US $100 bill which would mean, he would be over paying by at least $30.00. His friend bailed him out and paid for everyone using his credit card. Even the guy working the rental desk told the guy to let his friend pay for him. Gotta love Canadians, don’t want to rip off anyone.
Once on the water, you get to see the lake and its surroundings from unique viewpoints, all a little bit different but all breathtaking. The water is super clear but also super cold. There are hypothermia warning signage everywhere so definitely try not to fall into the water. If you make your way to the far end of the lake, you will get to see where all the melted glacier water enters the lake. Warning, don’t get too close to see it (or close to any shoreline). We saw a canoe “beached” right next to the stream. I’m glad to report though that they eventually got free after seeing them again in the middle of the lake.
Even though this lake activity might be super touristy, it was definitely a lot of fun. Plus, it was a nice break from our long hikes the day before. The $90.00 price tag is pretty steep especially compared to other similar activities elsewhere, but we didn’t have to pay to enter Banff National Park because of Canada’s 150th anniversary and all the other hikes were free so we splurged a bit.
THE RUNDOWN:
Moraine Lake Lodge
1 Moraine Lake Road
Lake Louise, Alberta
Canada
Price: $90.00 (CAD) per canoe per hour
Hours: 9:30 AM to 6:00 PM (hours could change depending on the season and daylight)
Parking: Parking lot and some road side parking 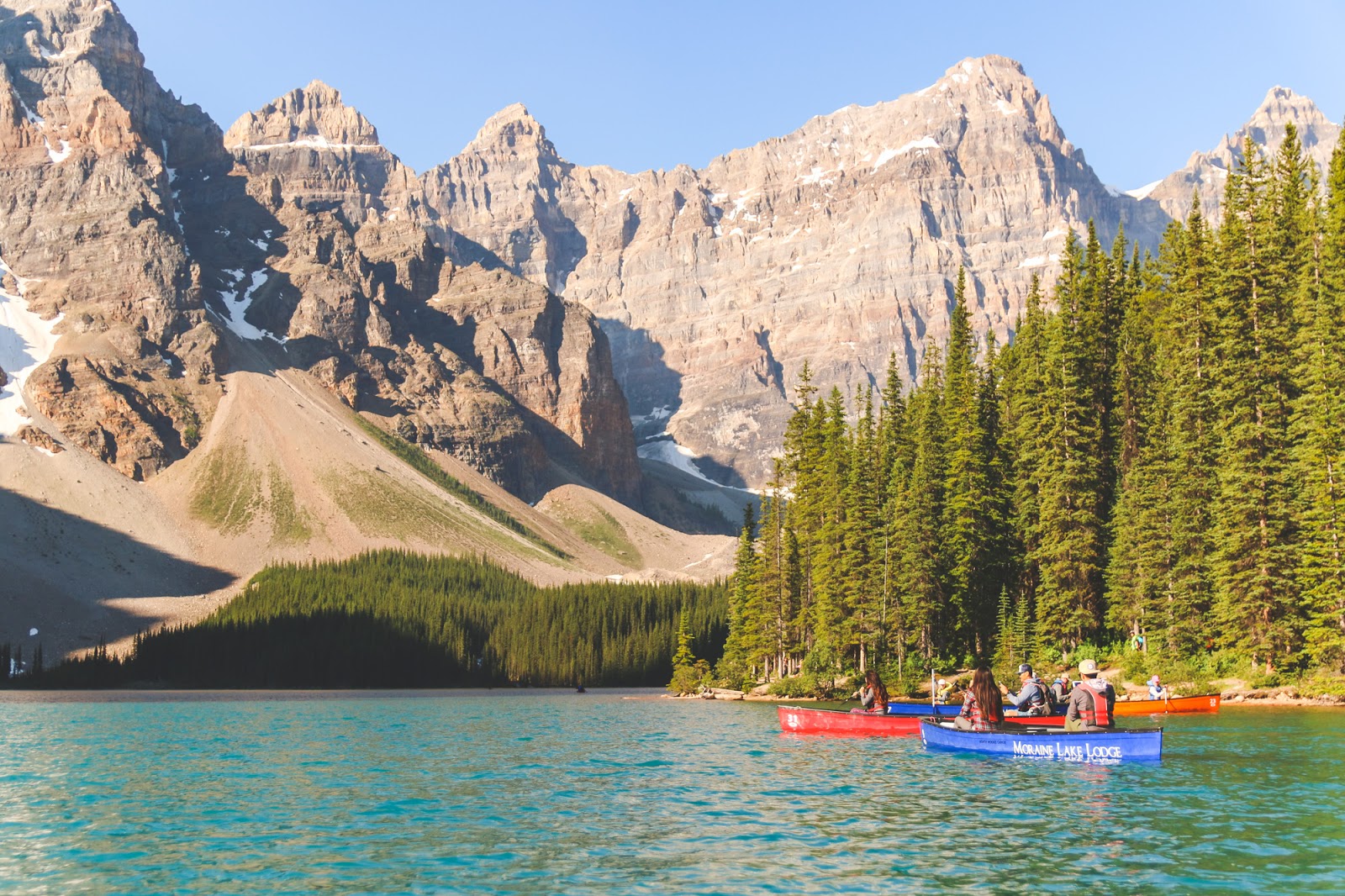 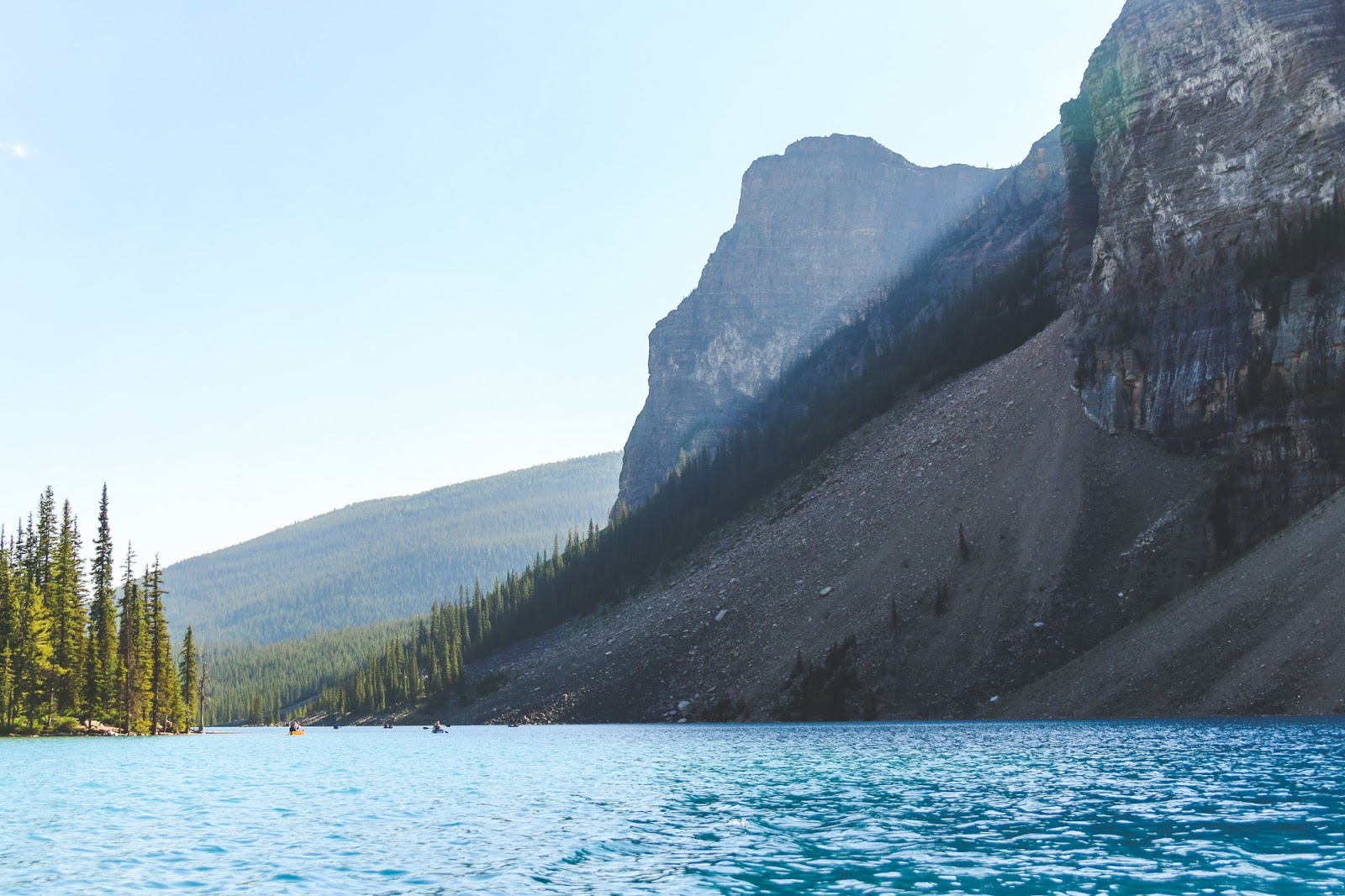 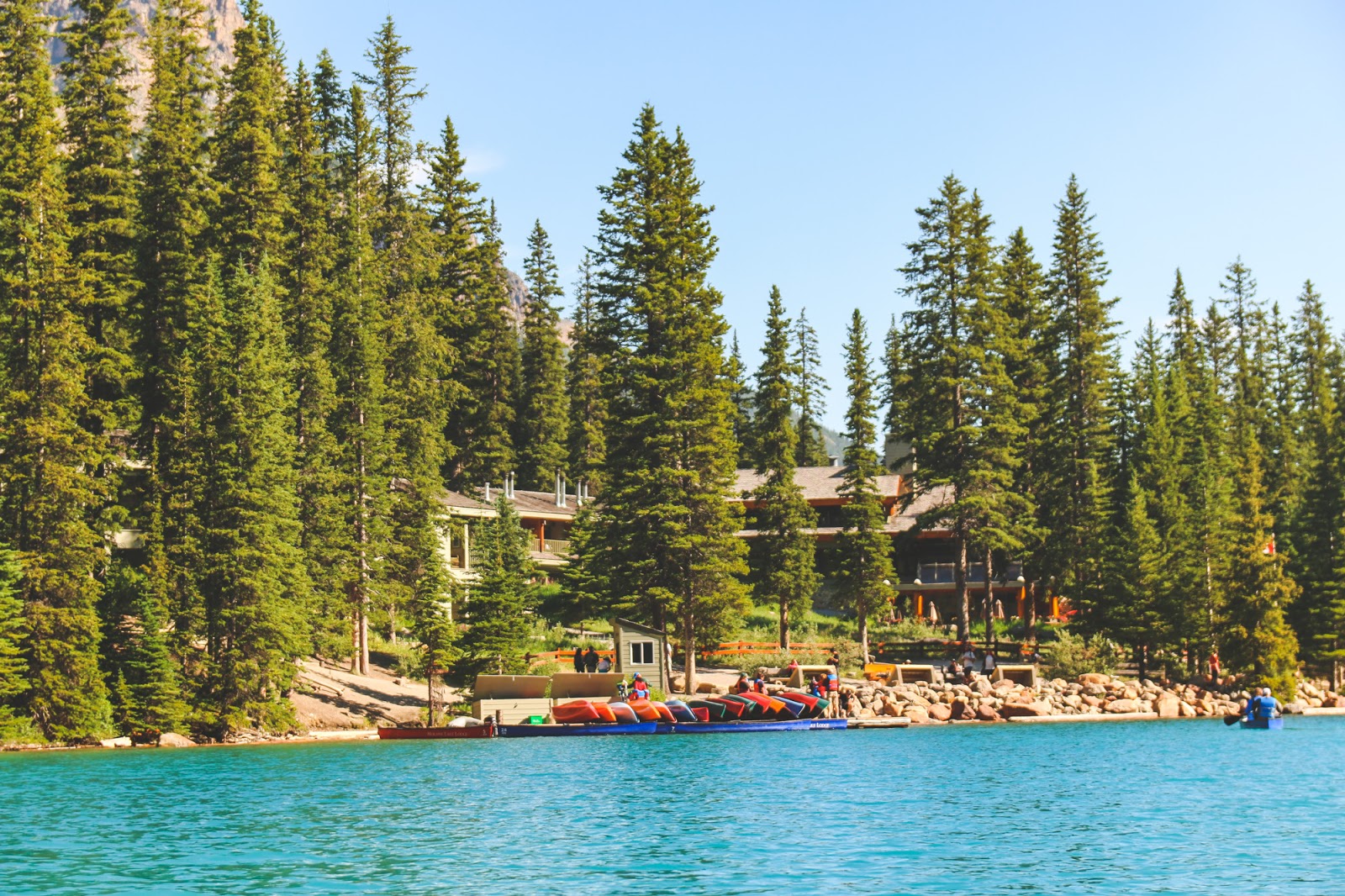 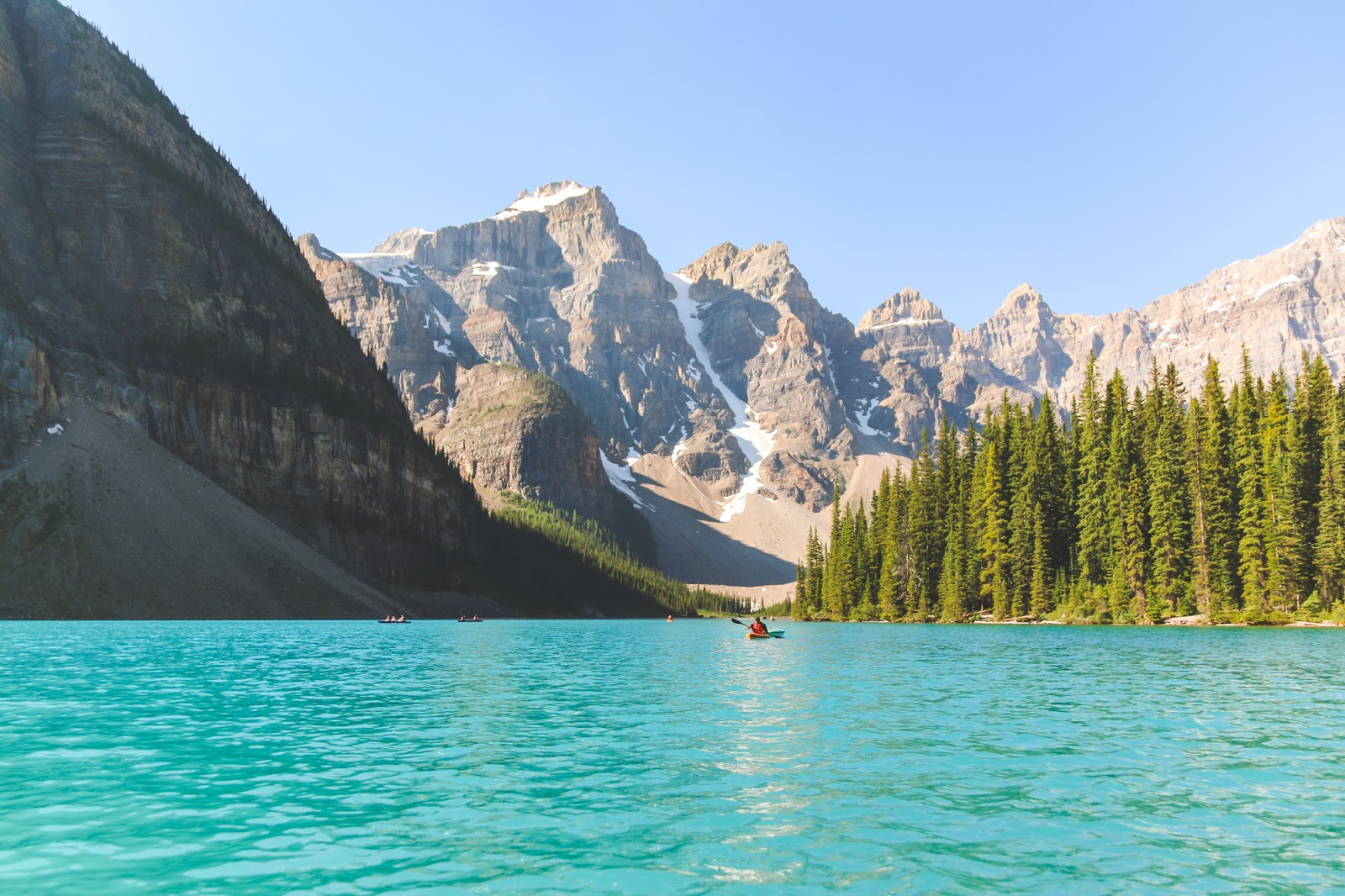 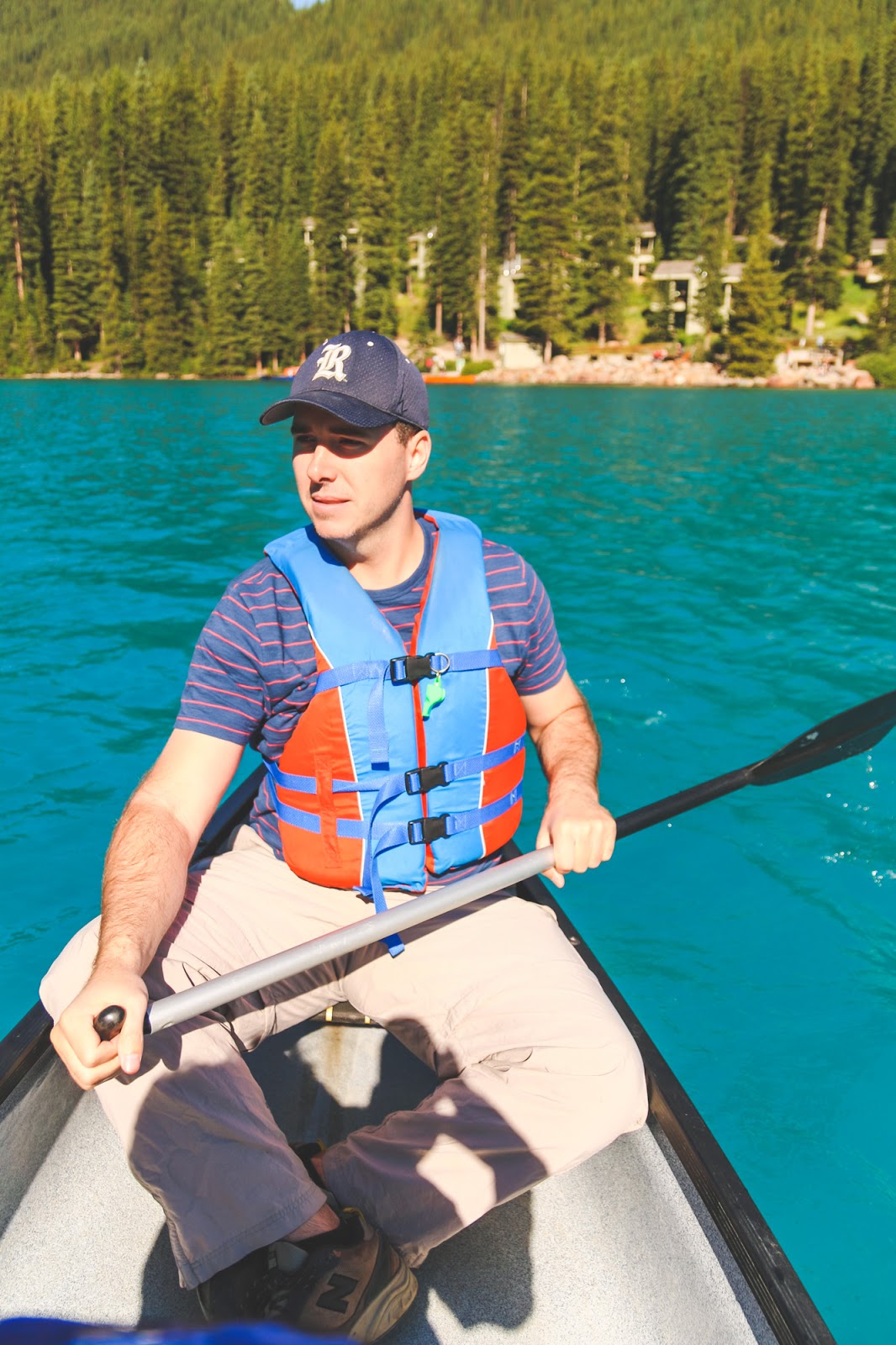 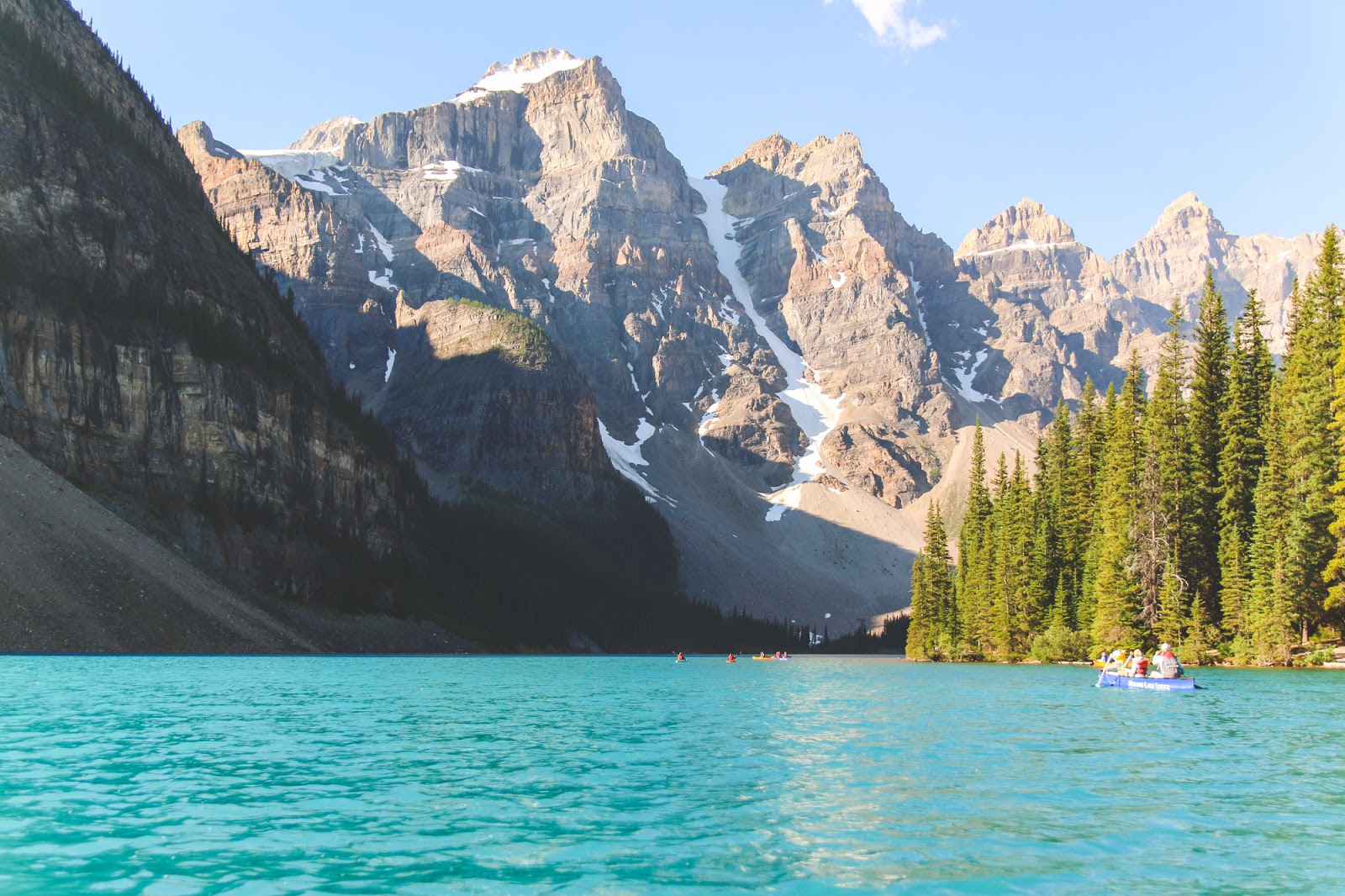 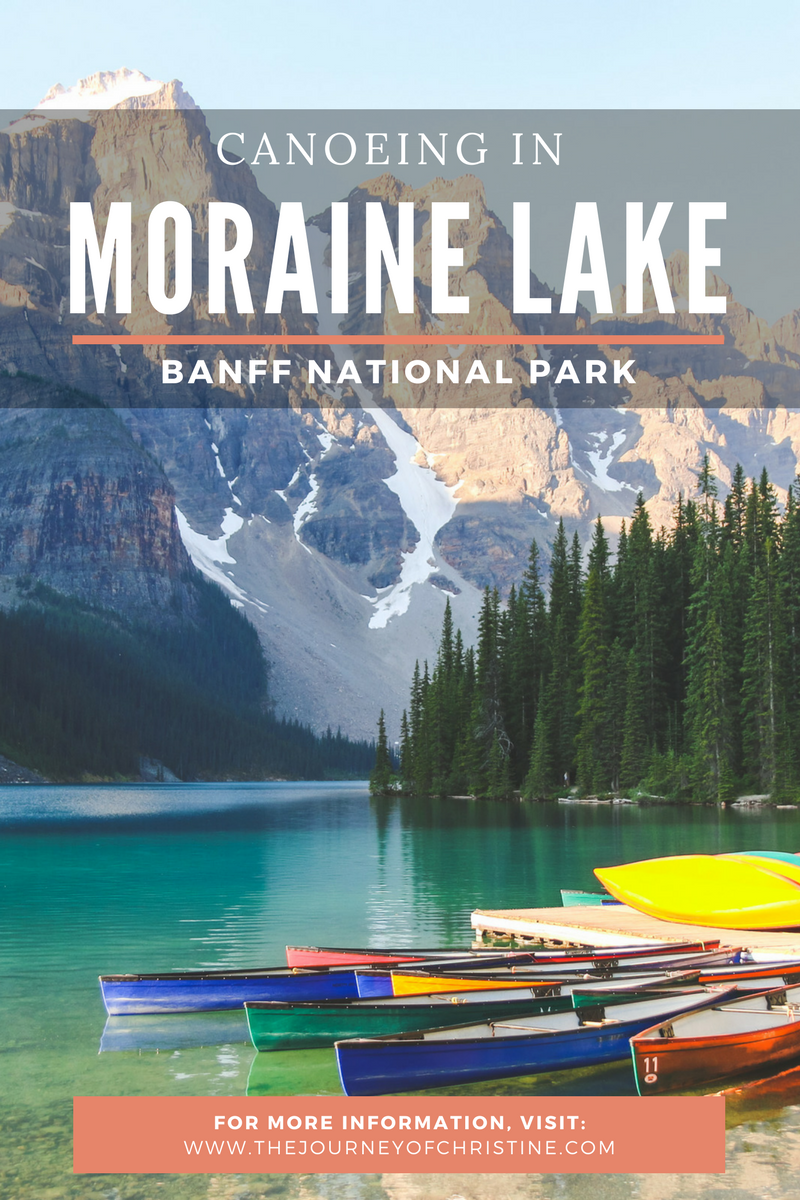